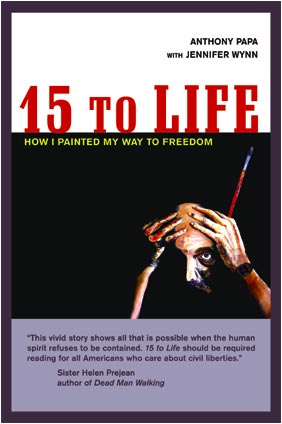 How I Painted My Way to Freedom

15 to Life tells a rare adventure story: how a family man, railroaded by the subterfuge surrounding the War on Drugs, was able to get an early release from prison and become a major activist against draconian drug laws.

Offered a chance to make a quick $500, Anthony Papa agreed to deliver an envelope in a fated police sting operation. His first and only criminal offense cost Papa a 15-year sentence to Sing-Sing, New York State’s maximum-security prison. Suicide was contemplated when Tony Papa realized that the best years of his life would be spent clapped up in a six-foot cell. One day he discovered painting. It gave him hope, and he discovered a talent. When the Whitney Museum chose his painting to exhibit, he suddenly received intense media attention. Governor Pataki got wind of his case, and after 12 hard years of time, Anthony Papa was granted clemency. 15 to Life is more than a dramatic story more than an inside look at the most dangerous prison in America today – it is also an important sociological work and a call for reform of the destructive laws of the War on Drugs.

“Anthony Papa has written a riveting account of how he courageously painted his way to freedom from prison after unnecessarily serving twelve years. His story puts a human face on the nearly one million nonviolent drug offenders confined in prisons throughout the country.”

“A powerful memoir of one man’s struggle for freedom, 15 to Life tells in vivid prose the story of Anthony Papa, a painter and a casualty of the War on Drugs. This journey of a soul shows the power of art to transcend the violence of prison, and all that is possible when the human spirit refuses to be contained. Papa’s account should be required reading for New York lawmakers and all Americans who care about civil liberties.”
— Sister Helen Prejean, author of Dead Man Walking

“Papa’s story gives me the chills. He’s been through so much you won’t believe it ‘till you read it.”
— Jack Black, Actor

“Anthony Papa’s 15 to Life tells of a heroic escape from a brutal system by a man who refused to give up. A thrilling, unforgettable read!”
— Tim Robbins, Actor

“Anthony Papa’s 15 to Life is a must read for the hip-hop community. Over 94% of the 18,000 people locked up under New York’s drug laws, the harshest drug laws in the country, are black or Hispanic. Like Papa, I am trying to end these racist laws. We need your voice. You can start by reading this book”
— Russell Simmons, Chairman, Hip-Hop Summit Action Network

“Anthony Papa’s 15 to Life is a gripping story of justice gone wrong and an inspiring tale of personal triumph. It is a scathing indictment of the antiquated Rockefeller drug laws that have imprisoned thousands of nonviolent offenders and wasted billions of dollars of taxpayer money.”
— Andrew Cuomo, former US HUD Secretary, author of Crossroads

“There have been a lot of books over the years about men in prison, but Anthony Papa’s 15 to Life is unique. This is a wrenching, compelling, and darkly ironic story of a man discovering his artistic soul behind bars and using his talent to gain his freedom. It will provoke you, it might enrage you, and it could even inspire you. But it won’t easily let you forget it.”
— Peter Blauner, author, Intruder and The Last Good Day

“The Rockefeller Drug Laws must change and Papa’s 15 to Life is a good reason why!”
— Frank Serpico, legendary former NYC Police Officer

“15 to Life is an unbelievable story about one man’s journey through a living hell and how he survived and now is fighting to change the most racist drug laws in America. Read this book – learn something!”
— Al “Grandpa Munster” Lewis, Actor and Activist