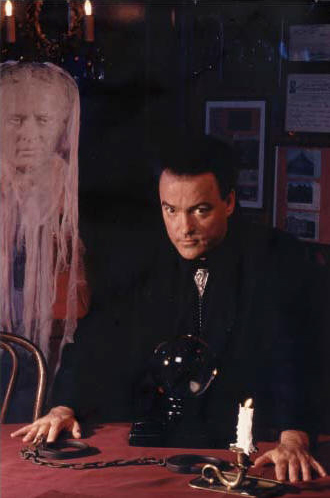 A Skeptic Blows Minds at Dragoncon

We are beginning a new series for our weekly blog in which we sporadically offer guest writings by Process Media and Feral House authors. Here is the first in the series by Feral author Mark Edward. See his book HERE.

“Dragoncon 2012 was an absolute blast this year. In between getting to meet Alice Cooper through my friend James Randi and wading through thousands of the most intense costumes I have ever seen in one place ever, I managed to get a standing room only 400+ group of both paranormal seekers and skeptical minds in one room for an hour of my best psychic “readings.”

Using some of the skills I wrote about in Psychic Blues, I laid it on thick and in the character of a “medium” for the first fifty minutes; accurately telling different people I was sorry they had recently lost their pet dog, how another had recently had some difficulty with her brown car and in one of those moments every mentalist or psychic lives for; I blew one woman away by telling her I saw a vision of the name “Stanley” and a picture that came into my mind of a clown walking through a graveyard, putting flowers on the graves. She stood up and looked like she was going to break out in tears. She then proceeded to tell the stunned audience that when she was a little girl in her home town, there was a “crazy old man” who used to dress up as a clown and put flowers on the tombstones in the local cemetery. Her name was Cindy, but amazingly, he called her “Stanley.” I had even described his long clown shoes.

So how did I do that? I can’t tell you here, it would take too long. But suffice it to say that this woman was so freaked she came up after the show, (after I had done the “reveal” to the rest of the audience explaining how I had accomplished what they had only a few minutes before been so taken in by) and flatly refused to believe the simple “law of large numbers” explanation I gave her. When I asked if she had been about to cry, she answered with a line that I will always remember and that made the whole trip to the humid climes of Atlanta in August worthwhile. She said, no, she had been so struck by what I had said, she said, “I was gonna’ puke.” High praise indeed for a psychic with the blues.

It is always very satisfying to see the look of wonderment on an audiences’ face when I spin my readings out into their midst, but even more rewarding when I stop, then quickly ask, “You didn’t think I really saw dead people around you talking to me did you?” Then proceed to swiftly explain exactly how I knew what I knew and how I found out about that specific information. When teaching magic, this is what I refer to as the “ah ha” moment. When illusion suddenly turns into disillusion I can audibly hear the crowd either groan in a sort of despairing exclamation, or simply moan at the realization of how simple it all really is. As I told the crowd the next day in my lecture on the how and why of what I did, it’s as if the audience exhales their ignorance. It may not be as enchanting or mystical as going away thinking I could read their minds, but it shows in a flash just how easy it is for today’s crop of psychics, mediums and grief vampire charlatans to convince an audience that they have supernatural powers or a direct line to the world of ghosts and spirits. If I could do that, I would be the most dangerous mind on the planet.”