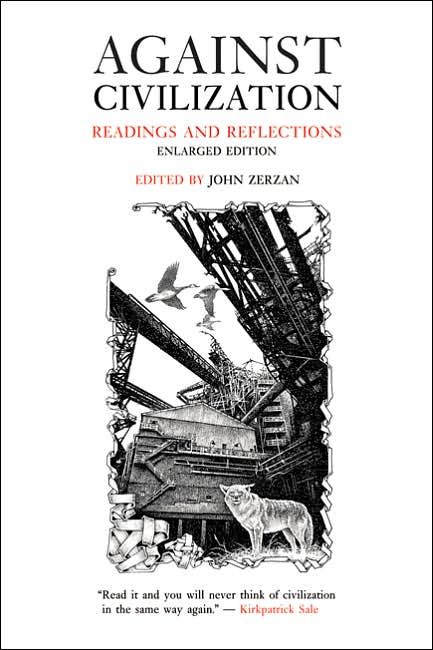 With mass poisonings, global warming and other tidings of contemporary civilization threatening the planet, shouldn’t we begin to reconsider our unthinking attachment to it?

Feral House’s new expanded edition of Against Civilization adds 18 new essays and feral illustrations by R.L. Tubbesing to the contemporary classic that provides 67 thought-provoking looks into the dehumanizing core of modern civilization, and the ideas that have given rise to the anarcho-primitivist movement. The editor of this compelling anthology is John Zerzan, author of Running on Emptiness (Feral House) and Future Primitive.

“I celebrate John Zerzan’s anthology harboring the best of civilized people’s critiques of civilization. Herein the reader will discover the questions that need to be asked and the insights that beg to be nurtured if humankind and the natural world as we know it are to thrive into the future. This book is that important.”
— Chellis Glendinning, author of My Name is Chellis and I’m in Recovery from Western Civilization

“It is its collective refusal to say ‘Here is civilization: just accept it’ that makes this volume so important. Read it and you will never think of civilization in the same way again. Or put any more faith than a grain of mustard seed in its unimpeded future.”
— Kirkpatrick Sale, author of Rebels Against the Future

“This is an extraordinary collection by the most important anarchist thinker of our time, a potent introduction to, as Zerzan so accurately puts it, the pathology of civilization. For decades now Zerzan has been articulating a practical and theoretical critique of civilization, and this book—though an edited anthology of his own and other people’s essays—brings it all together in a compelling, undeniable way. I love all of Zerzan’s books, but I think I love this one the best.”
— Derrick Jensen, author of A Language Older Than Words

“Is it only terrorists we’re worried about? We are witnessing the collision of civilization and the earth.”
— Al Gore