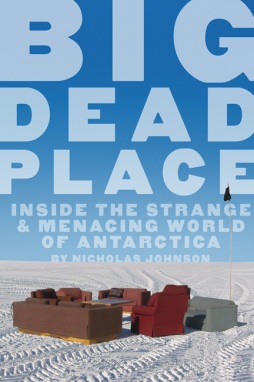 Inside the Strange and Menacing World of Antarctica

What goes on in Antarctica?

Is it the pristine but harsh frontier where noble scientific missions are accomplished? Or an insane corporate bureaucracy where hundreds of workers are cooped together in hi-tech communes with all the soul of a suburban office park?

The Foreword is by Eirik Sønneland, who claims the longest unsupported ski trek in the continent’s history. Also included is a glossary of Antarctic slang and bureaucratese, and 16 pages of color photographs.

Author Nicholas Johnson (now deceased) worked as a fish-cannery cleaner in the Aleutian Islands, an office manager at a software company, a sales clerk at Banana Republic, a taxi driver in Seattle, an English teacher in South Korea, and as a valet at International House of Pancakes. He has spent five summers and two winters in Antarctica. His website, BigDeadPlace.com, provides an irreverent, no-nonsense perspective of Antarctic employment.

“Even in Antarctica, hash still needs to be slung, dishes need to be washed, and the support workers at the three high-tech science bases operated for the US Government by the Raytheon Company are not often happy bunnies. They are mostly neurotic misfits. A SWAT team of corporate psychologists is sent in every year to assess personnel for symptoms of lunacy before the long, cold Antarctic night closes in. Johnson’s savagely funny story of life ‘Inside the Strange and Menacing World of Antarctica’ is a grunt’s-eye view of fear and loathing, arrogance and insanity in a dysfunctional, dystopian closed community. It’s like M*A*S*H on ice, a bleak, black comedy.”
— The Times of London

“Everyday life in modern Antarctica is not the struggle against the forces of nature that is often portrayed in the stories of the early Explorers… this humorous and often wittily sarcastic account of a place that people tend to romanticize should be read by anyone seriously considering working in Antarctica; it is also the only book available that shows modern Antarctic life and culture from the worker’s perspective… Recommended.”
— Library Journal

“Big Dead Place is the latest in a long line of accounts by polar ‘expeditioners,’ extending backwards to Frederick Cook of the Belgica Expedition, of the hardships of living and working in the highest, driest, coldest, and windiest continent on earth. Johnson’s tales of life at McMurdo Station, Antarctica, are often humorous, occasionally tragic, but always on target. They offer ample evidence that the greatest hardship associated with the Antarctic today is not the cold or any of the other elements of the physical environment, but a social environment created by the mismatch between a group of free-spirited individuals seeking adventure and a bureaucratic system whose primary goal seems to be exerting control in a place where control is an all but impossible task.”
— Lawrence A. Palinkas, Ph.D., University of California, San Diego

“(T)his memoir offers an insider’s look at a place that few people know anything about and fewer still have ever seen.”
— Publishers Weekly

“A personal account so full of history, hilarity, and raucous events that I can’t stop rereading it! Johnson’s voice is witty, insightful, and articulate as he details his fabulous and unforeseen experiences while working at McMurdo Station… in their preposterous glory: hypocritical bureaucracy run amok, not-so-discreet sex in the station chapel, drunken pranksters, and frozen pigs. I can’t get enough.”
— Powell’s Books, staff pick

“Far from the pure white landscape of our collective dreams, Nicholas Johnson’s Antarctica stands out as the fullblown, toxic spawn of America’s culture of corpo-dementia and shit-the-bed planetary greed…. Big Dead Place is some kind of weird masterpiece—Survivor on Ice as imagined by B. Traven. A fascinating, insane, soul-chilling and hysterical portrait of what may yet prove to be future—and future WalMart-adjacent tomb—of Western Civilization.”
— Jerry Stahl

“It took a full century and the building of centrally heated infrastructure for the island at the bottom of the world to produce something like a minor classic. Its author was a young American writer and itinerant contract worker named Nicholas Johnson, whose memoir Big Dead Place upon publication superseded a century’s worth of self-serving ice-beard memoirs and press-junket hackery.”
–Alternet

“No one has done more to change the way we understand Antarctica. Nick was unflinching in his critique of bureaucracy and authority in the United States Antarctic Program, but mainly he sought to create a dialogue within and about Antarctica that cut through cliche and hypocrisy in order to describe things as they really are, in all their glory and strangeness….”
–Progressive Review