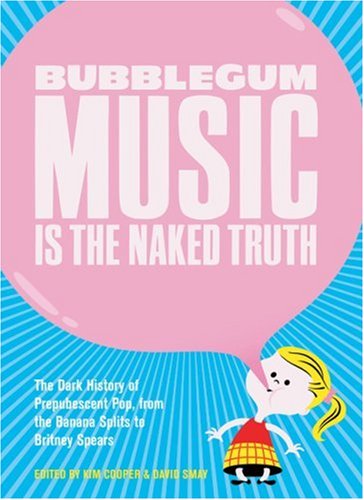 Bubblegum Music is the Naked Truth

The Dark History of Prepubescent Pop, from the Banana Splits to Britney Spears

From the Archies to Britney Spears, bubblegum music has excited every generation of music lovers. Featuring interviews with many of the genre’s major creators, this ambitious anthology dismantles the worst myths about how bubblegum is produced and identifies the gum tendencies of artists as various as the Sex Pistols, Abba, the Monkees, and the Ramones. The book reveals the light and dark sides of the music, telling bitter tales of litigious back-stabbing, pistol-wielding producers, and the perversities behind the jingles.

“Scram Magazine’s Cooper and Smay transform the previously unheralded contributions of bubblegum music, that disposable, danceable music aimed at the preteen set, into a scintillating blend of informative essay, fanzine fanaticism, and irreverent kitsch…. No mere dry encyclopedia, this zingy tome brims to capacity with opinion and attitude…. Littered with black & white photos of stars, LPs, picture discs, teen magazines, dolls, lunchboxes and even cereal box records, this crisply written book is a genuine, must-have pop culture document for both the nostalgic and those who come to scoff.
— Goldmine

“Written with the right balance of affection and cheek, this is an entertaining look at campy art.”
— Mojo

“(T)his wonderfully quirky title leaves no stone unturned in its coverage of bubblegum music…. this quirky and entertaining book is recommended.”
— Library Journal