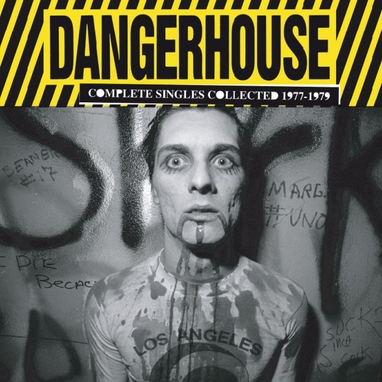 American Grotesque: The Life and Art of William Mortensen, a large and amazing book about the most unfairly disparaged photographer of the 20th century (Ansel Adams called him “The Anti-Christ”) was just sent to the printer, and the designer Jacob Covey did a masterful job. It’s truly one of the most beautiful books we’ve ever published.

To celebrate the completion of years of effort expended upon American Grotesque we purchased ourself the Dangerhouse Records singles collection CDs. Nostalgia for my early days in the fucked-up LA punk scene? Yes, absolutely. These were the bands I saw at the Masque and Whisky and a valley biker bar, ’77 and ’78. This was my identity until the scene became dull and pointless, and I moved on to UC Santa Cruz, becoming the only short-haired punk in hippie land.

The Dangerhouse singles were great. Largely well-recorded short numbers full of piss and shit. Nothing was completely formed, and punk was still casting around for ideas and beliefs. The booklet included in the two-CD set reveal the idiots who wore retarded colored sunglasses (as if they were rejects from Wet magazine) and day-glow vinyl throwaway clothing from thrift stores. There were the commie bands, the anarchist (but not too Situationist) bands, the anti-political bands, the crazy gay bands (thankfully not too anchored in post-AIDS political correctitutde), the Latino bands (again not insufferably anchored to PC ideas)… This was the Wild West. As Dangerhouse Records leader David Brown wrote in the booklet notes:

“Suffice it to say that the scene had everything: every kind of self-abuse imaginable, negative social patterns, infighting, gender-fucking, etc.”

David Brown also reveals how small the scene was, how difficult it was to sell the magnificent Weirdos 45 of “We Got the Neutron Bomb” b/w “Solitary Confinement”… Nothing better, but Dangerhouse couldn’t even move 2,000 copies! The bigger shows at the time drew 50 people or so… most punks were likely drinking and drugging in nearby alleys.

At the time, I had never before seen this sort of thing within the empty moron burg of Los Angeles. Such a great fucking experience. Get the Dangerhouse singles if you want evidence of it.