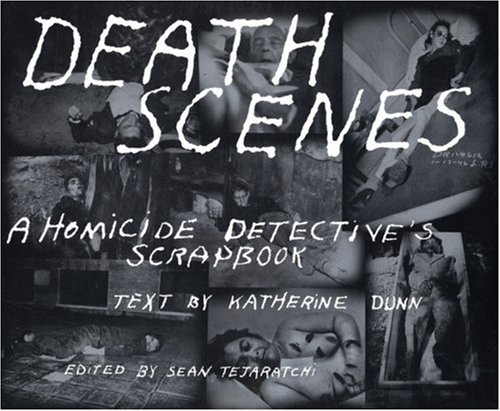 The publication of Death Scenes: A Homicide Detective’s Scrapbook proves there is no such thing as the “good old days.”

Jack Huddleston, a bona fide detective with the Los Angeles police department, collected together a scrapbook of oddities and gruesome moments from his years working for the force. Huddleston’s scrapbook spans Southern California in its noir heyday, circa 1925–1945, the time when the Black Dahlia killer and Winnie Ruth Judd were perpetrating their savage crimes.

Assembled into book form by editor and designer Sean Tejaratchi courtesy of collector and filmmaker Nick Bougas, Death Scenes is divided into several sections: “Odditorium and The Living”; “Accidents and Accidental Deaths”; “Suicides”; “Homicides”; and “The Morgue.” Katherine Dunn, whose book Geek Love (Knopf) earned critical acclaim and bestseller status, provides a cogent introduction, tracing the history of the man behind the scrapbook, meditating on the meaning behind the mayhem and madness.

“If you’ve ever wanted to gaze on crime-scene snaps… then this terrifying, near unbearable compilation is the book for you. Already an underground bestseller, the paradox is that Death Scenes is not so much a reflection of what a violent society it is, as what a safe one. For only in a society like ours, in which death is hidden away, would a book like this be so genuinely shocking.” — GQ Magazine