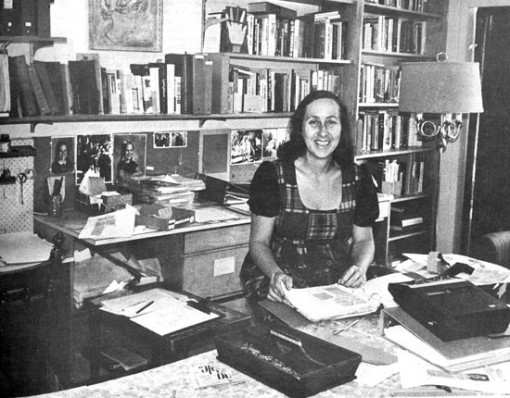 Mae Brussell in her study

“You can only solve a murder by knowing who is destroying the evidence.” — Mae Brussell
Some people blame the origins of modern conspiracy theory on the work of Mae Brussell.
What if Mae Brussell never uttered a “conspiratorial” idea, and backed up all her statements with major newspaper articles? You’d have trouble shuttling off her work to a realm supposedly occupied by kookery…
I’ve lately been rereading the new Feral House release, The Essential Mae Brussell: Investigations of Fascism in America, edited by Alex Constantine with an introduction by Paul Krassner. It’s an amazing book, the first one ever issued to reproduce this woman’s important, stimulating work.
The deaths of White House employees at the time of Watergate … the troubling issues surrounding overdoses of youth leaders … the creation of SLA and other questionable organizations that so affected the country.
You can get a copy of this title for a discount from feralhouse.com, and can get a bigger discount when ordered with other new releases from Feral House.