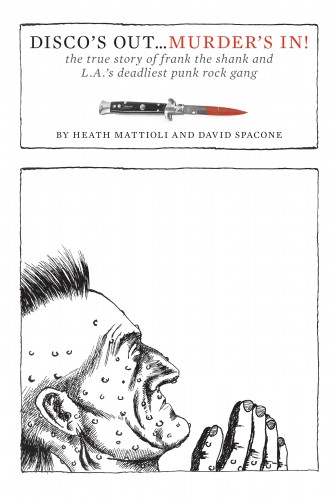 Disco’s Out… Murder’s In!

the true story of frank the shank and L.A.'s deadliest punk rock gang

Famous for its revolutionary aspects in musical, political, sexual identity and consumerist ideas, punk rock also has its lesser-known gangster ethos as well, explained here by players in the various punk gangs in Los Angeles, Orange County, and South Bay.

Some blue collar kids, responding to the violence and aggression of punk songs, formed punk gangs that got into beatings, drug dealing and murder. No gang was more notorious than La Mirada Punks, or LMP. Says LMP chieftain Frank the Shank after getting arrested by police for murder: “After having my hands in so much bloodshed over the years, I most certainly had it coming. I deserved whatever I got.”

Unexpectedly Frank was bailed out from prison by his father’s friend, a mob gangster. “Too many people died at the hands of punk rock violence,” said Frank. “I got lucky, some didn’t. The gangs ruined punk rock. I still have people telling me today that they quit punk because of LMP. I dig graves at a small cemetery just outside Los Angeles. What else would you expect for Frank the Shank?”

“Disco’s Out Murder’s In! is one of my favorite books of all time. I devoured it—An absolute page-turner. It’s an exciting and visceral account of the LA suburbs in the 80’s and an anti-coming of age story. It felt like I was right there. This book is so fucking punk – READ IT!” — Terry Richardson, Photographer/Director

“If you’ve never been in the jungle, a story about a tiger is just a story. Yes, you may shiver… but to you, it’s still just a story, an exciting escape from your every day life. But not to me … It’s real, it’s frightening, and the savagery of that world haunts you forever. I was afraid when I read this book. I caught my fingers tracing over old scars as I turned the pages, and I knew it was real. You can tell yourself that people like this don’t exist, but they do, and they would be pleased to meet you in the dark night of a hardcore boulevard.” — Jack Grisham, Author/Singer TSOL

Click the photo to hear an exclusive playlist created for the book!