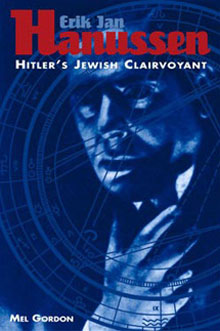 Erik Jan Hanussen made a name for himself as Europe’s most audacious and controversial soothsayer. Billing himself as “The Man Who Knows All,” he performed in cabarets and music halls, attracting the attention of everyone from Sigmund Freud and Thomas Mann to Marlene Dietrich and Peter Lorre. His exceptional paranormal abilities–along with his stage specialty of hypnotizing women to orgasm–garnered ardent admirers and equally ardent denouncements, religious and otherwise.

In March 1932, when Adolf Hitler’s political future seemed doomed, Hanussen predicted a resurgence of the Nazi Party. The prediction proved a psychic salve for Hitler, and Hanussen became an influential confidant of the superstitious fuhrer. But what Hitler didn’t know initially was that Hanussen was not the Dane he claimed to be but a Jew from Moravia whose given name was Herschel Steinschneider.