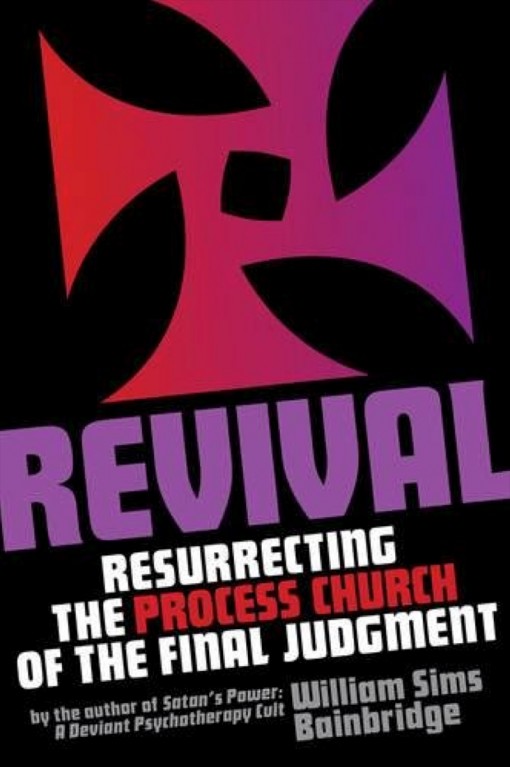 And with it, announcing the arrival from the printer of the new Feral House book just back from the printer: Revival: Resurrecting the Process Church of the Final Judgment by William Sims Bainbridge.

Those who know anything about the Process Church should be aware that Bainbridge is also the author of Satan’s Power, the mainstay of information about the Process Church prior to the appearance of Love Sex Fear Death by Timothy Wyllie from Feral House. Over the past few decades Bainbridge has worked for at Cyber-Human Systems at National Science Foundation, and he holds a positive view of the notorious cult.

The pages of Revival reveal whether the Processeans achieve the hopes expressed in their blessing: “May the life-giving water of the Lord Christ and the purifying fire of the Lord Satan bring the presence of love and unity into this assembly.” Will the Process Church successfully reconnect with people today? It fascinates me that the Process Church has been accused on being the most insidious murder cult of modern times, and several true crime books promotes this idea.

Another book that recently arrived at our front door from the printer is the coloring book based on the life of the musical master, Prince. It’s a lovely thing, and worth the effort of choosing colors for its mix of images.

It’s become a trite American joke to shout “I’ll see you in court!” at any perceived offense. Yet sometimes, it happens. In 2011 our sister press, Process Media, published the successful The Urban Homestead-Self-Sufficient Living in the City.  We were sued by a family business claiming trademarked ownership of this very commonly used phrase. The Electronic Frontier Foundation saw the folly of the suit and took up our defense. After six long years, we are happy to announce that the United States Patent and Trademark Office has upheld our claim that ‘Urban Homestead’ and ‘Urban Homesteading’ are generic terms.