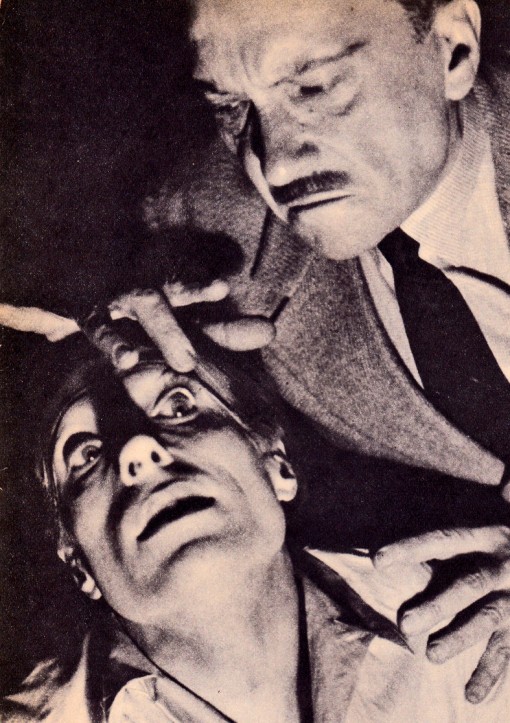 Maxa submits to examination in a weird drama involving leprosy, a mad doctor and tainted gold.

Customers have been wondering where they can order the new Grand Guignol tome by Mel Gordon. Bookstores or Amazon won’t be able to offer it for a good number of weeks now, perhaps months. But luckily you can obtain a copy today directly from the Feral House website:

Buy the Book… and you can see the book trailer here:

Here are some revelations from an original Grand Guignol performer named Maxa in a piece she wrote called “I am the Maddest Woman In the World”…. 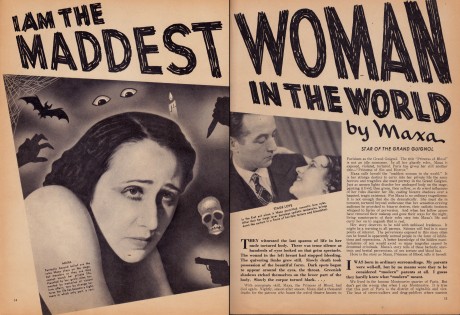 “I Am the Maddest Woman in the World”

Maxa discusses her unique career in this excerpt 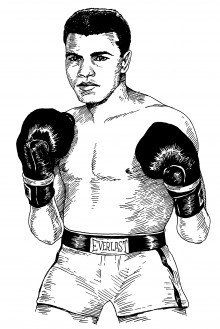 Our Feral days are busy with putting together titles for future seasons. We’ve already announced the books about David Bowie and rock saint Lemmy (Motörhead) Kilmister, for which we’ve received great contributions from both professional and amateur artists. Now we’re putting out the word for other coloring book titles. One about the famed Prince and the Greatest Man, Muhammad Ali.

We’ve asked the famed author Darius James (Negrophobia) to help put these tomes together for us. Here’s from Darius’ pen:

Adam Parfrey recently emailed with the news Feral House was following their first set of coloring books devoted to Lemmy Kilmister and David Bowie with a second series dedicated to two of America’s most popular cultural heroes: Muhammad Ali and his royal baddness–Prince.  He also asked if I would be interested in being an editorial consultant.

Just as he was for many Americans, Muhammad Ali appearance on the cultural landscape was a turning point in my life.  The moment he proclaimed “I am the greatest”, more so than Stokely Carmichael’s call for “Black Power!” or the Jamil Abdullah Al-Amin (H. Rap Brown) utterance “Burn, baby, burn!”, he demonstrated it was possible to speak truth to power.  This is a quality Ali reflected throughout his life.   Speaking truth to power.  Its an attribute he also shares with Feral House.

Of course I would work with them. But on coloring books?  Prince says it best:

You’re on your own

And if de-elevator tries to bring you down

With crayons.  Through his music, Prince inspired unrestrained joy. With contributions from both Prince’s fan-art community and professional illustrators,  the Prince coloring book will be a pure expression and celebration of the joy he inspired throughout the world. As my friend, writer Michael Gonzales, said: “It’s gonna be dope!”

Yes, as with the Bowie and Lemmy books we’re compensating for accepted contributions. If you’re interested in contributing, please contact us at the following email address: submissions@feralhouse.com

See this post for details on how to submit your work.

Hope you’re all as excited about this as we are.