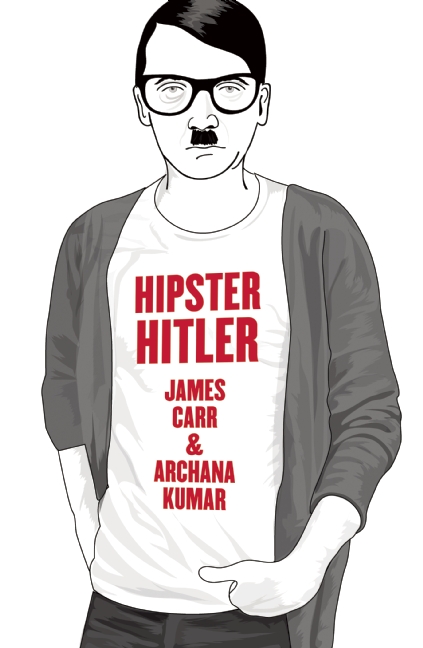 In a competition of the most hated memes of modern times, “Hipster” has now caught up with “Hitler.” Artists James Carr and Archana Kumar thought, why not combine the two? After all, Hitler was indeed a hipster of his time, a failed artist in Vienna scrounging up extra dollars or kroner painting quick architecture scenes for the tourists.

In their heavily trafficked website, “hipsterhitler.com,” these comic artists posit a new sort of history in which Hitler, wears Silverlake-trendy glasses, thrift store sweaters, and outspoken T-shirts, and the reader begins to quickly understand the history of Hitler in a new and strangely engaging way.

“Hipster Hitler does what any good satire does, it takes some of the real aspects of the events and characters, then gleefully distorts them to ridiculous levels for comedy gold.”
– Forbidden Planet International

“The book is frankly dangerous. It makes Hitler seem acceptable. Anything that attempts to make Hitler and his murders ‘cool’ is misguided and offensive. The publishers should think again.”  – Mike Freer, Conservative Member of UK Parliament