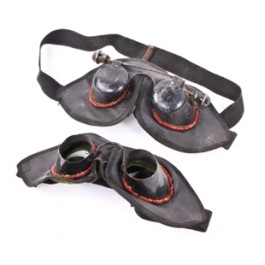 The political season is in full swing, and it seems that many people have their blinders, or hoodwinks, on.

One fellow I know, who at one time created extraordinary videos for an odd group of avant-garde musicans, today persists on repeating Fox-TV / Republican Party talking points on his Facebook page. His videos from a couple decades ago would no doubt be perceived by his beloved Republicans today as evidence that he was trying to destroy good Christian America. Now this artist calls me a “Socialist” on his Facebook page.

After publishing a book in the ’90s examining government foreknowledge of The Oklahoma City Bombing, we began hearing that Feral House was somehow an extremely conservative publishing house, and as a result our titles were not being sold in a number of liberal bookstores. At that time Clinton was president, and for some the establishment could do no wrong.

Prior to the 2004 presidential election, Feral House released a book excoriating the George W. Bush administration. Even leftists accused the book of going too far. By the end of Bush’s second term it became obvious that we did not go far enough.

More than a decade ago, after we published “Lords of Chaos” regarding the formation of the Black Metal scene in Norway, a major exposé accused Feral House of using the book to foment neo-Nazism, and to cover up their crimes. All this seemed strange to us since we were very conscious of including in that book all aspects of the scene no matter how negative or positive. And co-author Didrik Søderlind’s Norwegian job is working for an established liberal organization. “Lords of Chaos” has since won book awards for its balanced and extraordinary coverage.

Feral House publishes the work and biography of Church of Satan founder Anton Szandor LaVey. In the late ’80s after Geraldo Rivera did his highly rated exposes about Satanic crime, the Barnes and Noble chain decided to ban Feral House books, but about a year or two later the chain secretively decided to sell Feral House books once again.

Pacifica Radio conspiracy maven David Emory had released two programs accusing Feral House of complex and insidious plots, or somehow convincing the unwashed masses of our credibility and then sneaking in vicious tomes to inspire fascism and goose-steppery. These shows seemed to inspire a few Emory supporters to post weird and unsupported accusations against Feral House and me personally as being a Fascist and Satanist.

Just last week a personal friend was angry at me for not picking up the Holocaust Revisionist cudgel, and publishing tracts accusing the Israeli state for inventing aspects of World War II calamity to siphon money from European states and overlooking their own paritcular evils. He called me “chickenshit.”

Now I won’t even get started with the accusations of Freemasons and anti-Freemasons about our book, “Ritual America.” That wild one deserves its own lengthy blog.

Time to put on your Hoodwinks, everyone!