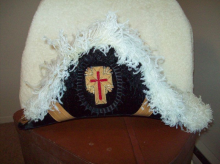 While scouring an interesting second-hand store in Seattle in the ’90s, we discovered an elaborate uniform worn about a century ago by a Knight Templar. The suit included an elaborate array of belts and sashes, a thousand small buttons, and a feathery hat, which I later discovered was called a “Chapeaux.” The Chapeaux’s feathers were actually ostrich plumes. Best of all this faux-military suit fit me — a tight fit to be sure.

At this time I wrote a weekly column for The San Diego Reader called “HelL.A.” which examined Los Angeles with a sometimes dyspeptic though often loving look at Los Angeles. The photograher for this column, Ted Soqui, became a good friend, and after he was threatened by then-publisher Michael Sigman with being fired by the L.A. Weekly due to my behind-the-scenes column about the rag, Soqui quit snapping images for “HelL.A.”

Ted and I had loads of fun doing “HelL.A.” and I was sorry to see him go, but was glad to see that cocktail-fanatic and excellent photog Scott Lindgren took on the job. A year later, Soqui came up to visit me in Portland OR and he took the opportunity to take some shots of me in my Knight Templar outfit. One was used for a satirical article about Freemasons for a magazine called The Nose, a take-off of the East Coast mag Spy. Shortly after the magazine appeared, a drunk driver piled head-on into my pickup truck, throwing me out a side window. Despite the coma and head injury, I recovered and carried on.

Anti-masonic conspiracy theorist Michael A. Hoffman II was quite certain that my injuries were due to Masonic payback for wearing the Knight Templar outfit with the ostrich-feathered chapeau. Hoffman freaked out Jim Goad with this story. Goad told the blogger Luke Ford this: “I know nothing about the Masons but I suspect that is a breach of the Masonic code. Hoffman started going off on how Adam should never have done that. The Masons don’t like to be f—ed with. That they will strike him. It will be severe. It will be on a day with great political significance. It will be the final blow to Adam Parfrey.”

Well, I’m still here, and have just sent to the printer the book Ritual America with the help of Craig Heimbichner and amazing designer Sean Tejaratchi. Ritual America is 8.5 x 11 in size, 380 pages in length, with over 400 images. It’s the work of a decade. Despite what others say, I don’t hold the Masons accountable for my injuries.