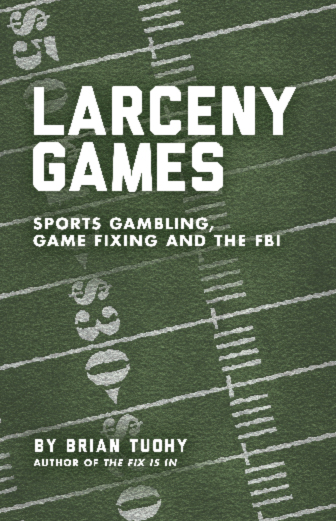 The NFL is a $10 billion-a-year business with prominent government and corporate ties—CBS, NBC/GE, Disney/ESPN, and FOX to name a few. As the late broadcaster Howard Cosell wrote in 1985, “The NFL, you see, monitors and collects just about everything that is written about it in newspapers and magazines and said about it on radio and television. . . . Like the CIA and the FBI, the NFL has its own enemies list—and I got the distinct impression that I was at the top of it.”

Although sports gambling is seen as a victimless crime, 99 percent of all sports gambling in the United States is done illegally, its untold billions of dollars directly handed by the mob. It is their top money-maker, followed closely by loan sharking activities that often accompany gamblers who cannot pay their bookies in time. When games are fixed today, the money wagered on rigged contests is trafficked through these mob-backed bookmakers.

Much of the information of this book is taken directly from FBI case files obtained through multiple Freedom of Information Act requests. The FBI held over four hundred files directly related to sports bribery, which is the legal term for game fixing and/or point shaving. These covered everything from horse racing to boxing to college athletic events to the NFL, NBA, and MLB (with a notable exception of the NHL).

“If you’ve lost money gambling on games, there’s a reason. If you’ve won, read this before you put down your next bet. For his own good, Tuohy probably shouldn’t have written this book.” — Howard Schlossberg, Columbia College ,Chicago

“Once again, Brian shows there’s much more to professional sports than meets the eyes (or ears), He digs so deep that he’ll need a bodyguard!” — Sam Bourquin, Host, WHBC Ohio