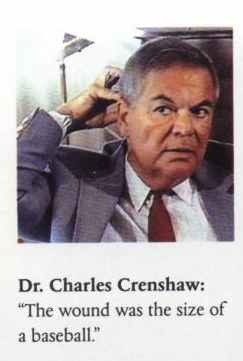 If you believe that the Warren Commission–upon which sat Allen Dulles, the same head of the CIA that JFK fired–had no ulterior motives regarding its conclusion of the assassination of President Kennedy; if you also believe that a mob-affiliated owner of a strip club just happened to be in the right place at the right time to kill the accused assassin, and his rationale to do so was to save Jacqueline Kennedy the hassle of going through his trial … we politely request that you go elsewhere this Feral Friday.

Now that it’s November, 2013, some 50 years down the road, many files regarding the Kennedy Assassination are still withheld from public inspection. We’d love to see Lee Harvey Oswald’s income reports, for one.

On this fated month we will be offering Feral House readers a special offer. If anyone purchases one of our JFK assassination volumes, namely Alex Cox’s The President and The Provocateur: The Parallel Lives of JFK and Lee Harvey Oswald and/or Kenn Thomas’ JFK & UFO: Military-Industrial Conspiracy and Cover-up from Maury Island to Dallas, Feral House will give you a free electronic book version of the essential 704-page classic, The Assassinations: Probe Magazine on JFK, MLK, RFK and Malcolm X.

This offer will expire December 1, 2013, and it’s only available through Feral House. God bless all truthseekers.

GET YOUR FREE EBOOK HERE!

*Kenn Thomas will be presenting at the 2013 UFO CON on the subject of his book JFK & UFO read more about it HERE.