A Sordid Evening of Sonic Sorrows 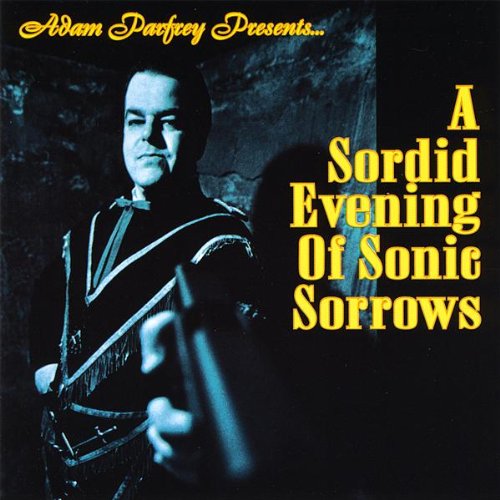 Writer, editor, and Feral House publishing mastermind, Adam Parfrey is intelligent, soft spoken,and a polite sort. However, on his first full-length solo release, A Sordid Evening of Sonic Sorrows, Parfrey and cohorts (including Boyd Rice and Jim Goad) flip-flop between two extremes. Half the disc contains crunching punk/metal doom courtesy of Poison Idea, including cover versions of Black Sabbath, Lou Reed, Leather Nun, and Steppenwolf. The other half is easy listening music with truly twisted lyrics. Parfrey applies the theory often attributed to Anton LaVey that the most “relaxing” or “lite” music can contain a darker agenda if you choose to perceive it in that manner. With that in mind, the musical portion is pretty standard, but the vocals glide between singsong, upper-class twit (“The Pusher”) to bowels of Hades growl (“No Rule.”) “Goldstein’s out Tonight,” based on the Blitz track “Someone’s Gonna Die,” sounds as if Tesco Vee, decked out in fur coat and plastic devil horns, invaded the proceedings, while “Quiet Village Idiots” has Les Baxter’s haunting melody aided not by bird sounds but Dawn of the Dead moans and brays. If that makes you wince, steer clear of “Rubber Room.” Parfrey takes Porter Wagner’s bizarre country tale of mental illness a step further by changing the words to reflect a child stuck in a mental institution. Parfrey even goes above and beyond by delivering the vocal as if he’s Elmer Fudd with Down’s syndrome. Bad taste? Absolutely. A smashing release of balderdash from a keen bunch of deviates? Definitely.