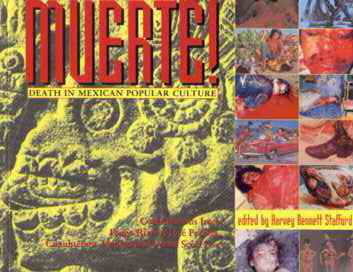 How a culture approaches and depicts death says a lot about the way it faces life. In America, death is a fixture of pop culture, shown in fantasies that are violent but curiously detached from reality and moral lessons. In Mexico, death occupies a much different cultural space. Muerte! explores the lurid history of Mexico’s fascination with death, starting with pre-Columbian mythological depictions of death as part of a constant cycle, to the Colonial period’s unhappy marriage of native views with Judeo-Christian fire and brimstone, to J.G. Posada’s remarkable turn-of-the-century engravings of death that were popular images in newspapers of the time. The author has organized a compellingly dark array of paintings, engravings, and photographs from the grisly but popular tabloids Alarma!, Peligro! and Poliester, to name a few. Essays by Diego Rivera and Mexican scholars offer insights on the Day of the Dead, Catholic ritual, and the current lust for sensational gore.

This singular volume came about as the result of gringo fine artist Harvey Stafford’s exploration of Mexican tabloid culture. For this volume, Stafford accompanied tabloid photographers on their visual quest for death scenes, purchasing publication rights to dozens of photographs from the photographers themselves. The way Mexican tabloids affected his thoughts about death and his attitude towards art is revealed in Stafford’s introductory text.

“With Muerte! Feral House once again takes you into the mayhemonic world where Walt Disney fears to tread.”
— Robert Williams

“The stuff in Muerte! will really make you turn your lunch.”
— While You Were Sleeping

“Editor’s Choice: A magnificent investigation into murder, mayhem and massacre within Mexican pop culture and its cultic worship of death.”
— Dr. Anil Aggrawal, Journal of Forensic Medicine and Toxicology