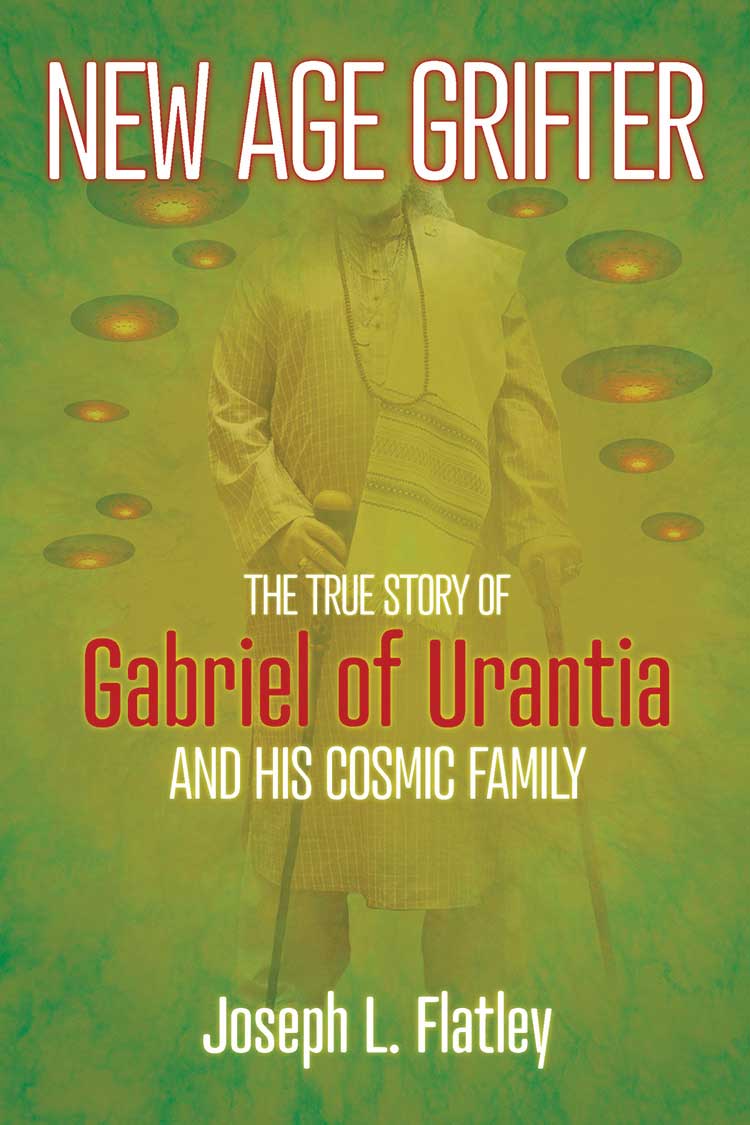 The True Story of Gabriel of Urantia and His Cosmic Family

Feral House is no stranger to angry emails from disgruntled readers who can’t bear to see their beliefs challenged and sacred cows slaughtered. Yet, the situation we encountered with New Age Grifter: The True Story of Gabriel of Urantia and His Cosmic Family was a bit different…

Publishing a book about an active cult is challenging. We are diligent in our fact-checking, and writer Joseph L. Flatley is a resourceful and consummate researcher. Yet, in modern America, money is the law of the land. If you have enough money, there are lawyers who will happily take a large portion of it and write as many threatening letters not just to you but to everyone involved in making a book. And, of course, our lawyer must waste time (and our money) responding to every scurrilous claim made by the cult. It’s annoying at best and costly at worst.

That’s what wealthy people do. They use their money as a weapon to keep their status quo intact.

The people harmed were the impetus for Flatley to tell their story. He says:

“I met my first member of the Global Community Communications Alliance in 2016. He was convinced that he had quite a story on his hands, the story of Gabriel of Urantia and his bizarre cult, and he wanted to put it in my hands. I wasn’t so sure. I mean, I had heard about all the famous cult villains: Charles Manson, Jim Jones, the Heaven’s Gate crowd, to name a few — and say what you will about Gabriel, but he’s no Jim Jones. But this former cult member kept at me, and eventually, I did investigate the community in the desert. What I discovered was a case study in human nature and how it can be twisted to benefit a few people at the expense of many others. There’s palace intrigue, mind control, sex, something resembling rock’n’roll, farm animals, and possibly even UFOs. The story has it all, and I’m glad I was sucked into it.”

We think you’ll be sucked in as well.

Gabriel of Urantia is the leader of a UFO religion based in the desert of southern Arizona. He has spent the last three decades weaving together his belief system–a tapestry of Eastern spirituality, Born Again Christianity, and New Age platitudes. In a compound in the desert near the Mexican border, his 100-plus disciples tend the garden, take classes, and serve their guru while they wait for the end of the world.

Gabriel is a guru with an eye towards the recording charts with his TaliasVan and the Bright and Morning Gabriel’s spiritual teachings with a vocal style that would fit alongside the country’s most bizarre outsider Star Band is a 12-piece hippie jam band that combines artists.

How does this cult make its money? How does it control its followers? What is its connection to a powerful and controversial hedge fund billionaire? Utilizing legal documents, press accounts, academic research, and untold hours of exclusive interviews, journalist and author, Joseph L. Flatley helps readers understand life in this experimental community and the damage done to his biological and cosmic family members. New Age Grifter explores this group’s activities in the wider context among American New Religious Movements and utopian communities.

Author Bio: Joseph L. Flatley is an author and investigative journalist living in Pittsburgh, Pennsylvania whose “beat” is conspiracy theories and fringe subcultures. In his books and articles, he has chronicled internet con artists, doomsday preppers, Satanic Panic pseudo-therapists, and Julian Assange, to name a few. His stories have appeared in The Verge, The Outline, Postindustrial, and CounterPunch.