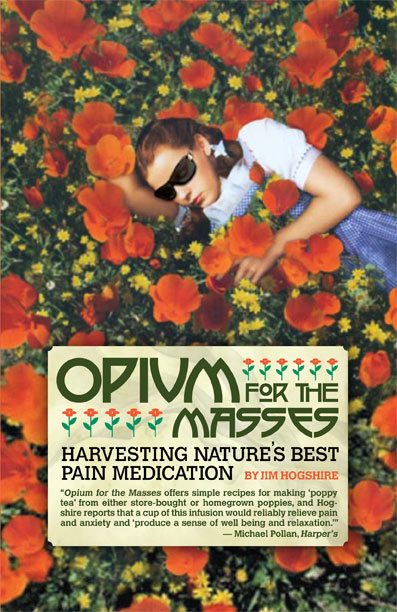 Opium for the Masses

Opium for the Masses was such a national phenomenon when first released in the early ‘90s that Michael Pollan wrote a cover story for Harper’s magazine about the book, in which he he expressed his amazement that a common plant, P. somniferum, or the opium poppy, grows wild in most states, and could be made into a drinkable tea that acts in ways similar to codeine or Vicodin.

With Opium for the Masses as the guide, Americans can learn how to supplement their own medicine chest with natural pain medicine without costly and difficult trips to doctors hamstrung by pernicious laws to prescribe proper pain relief.

This new edition features material on legal issues andfurther recipes, including how to make Laudanum and how heroin is created in the depths of of the Afghani poppy fields.

Jim Hogshire is also the author of the award-winning book Pills-A-Go-Go.

“Regarded as God’s own medicine,’ preparations of opium were as common in the Victorian medicine cabinet as aspirin is in ours. What Hogshire has done is to excavate this vernacular knowledge and then publish it to the world in how-to form, with recipes.”
-Michael Pollan, Harper’s