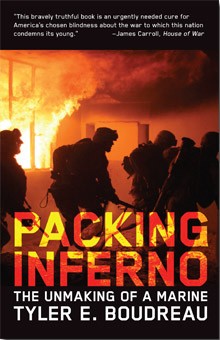 The Unmaking of a Marine

Tyler E. Boudreau is a twelve-year veteran of the Marine Corps infantry. He trained and committed himself physically and intellectually to the military life. Then his intense devotion began to disintegrate, bit by bit, during his final mission in Iraq.

After returning home, he discovered a turmoil developing in his mind, estranging him from his loved ones and the bill of goods he eagerly purchased as a Marine officer.

Packing Inferno is the spectacularly written story of the ordeal of a Marine officer in battle and then coming home. It is the struggle with a society resistant to understand the true nature of war. It is the fight with combat stress and an exploration into the process of recovery. It is the search for conscience, family, and ultimately for one’s essential self. Here are the reflections of a man built by the Marine Corps, disassembled by war, and left with no guidance to rebuild himself.

Tyler Boudreau was recently in Jordan with a veterans’ organization investigating solutions to the Iraqi refugee crisis. Tyler’s blog can be found at http://www.tylerboudreau.com/journal-psychatrix/

“I don’t know another book on any subject, let alone on war, let alone on Iraq or the Corps, that combines such breathtaking candor and self-awareness with such impressive insight (and extremely good writing, as well). Riveting, engrossing, simply terrific, a page-turner.”
—Daniel Ellsberg

“Packing Inferno represents an extraordinary meditation on the lethal contradictions of war and a grunts-eye view of the debacle in Iraq. Tyler Boudreau is that rare creature: a literate observer of the absurdities and tragedies of modern combat (American-style), and a no-holds-barred participant in the carnage of Iraqi urban warfare. Forget the high-falutin’ tomes on America’s mission in Iraq; this book really explains why the U.S. strategy was doomed to failure.”
—Michael T. Klare, author of Rising Powers, Shrinking Planet: The New Geopolitics of Energy

“Packing Inferno is a wonderfully written, deeply passionate account of one man’s journey to the “Foyer to Hell,” as Tyler Boudreau describes war. Tyler draws the reader into the subtleties of his “everyman” tale of conflict until it is too late, and we are trapped in a journey up the Euphrates River valley, a Mesopotamian Heart of Darkness which leads us straight into Dante’s Ninth Circle of Hell, a place reserved for traitors.

“It is here, in the unmaking of a Marine, that it becomes clear that Tyler Boudreau has jumped from the Foyer to Hell into Hell itself. Denied the brotherhood of the Corps which sustained him for so long, Boudreau must navigate his own way out of Hell, a journey upon which he is still embarked. This is what makes Packing Inferno so heartbreaking, because the reader knows that Tyler Boudreau has taken them on a journey which has no end. And while the reader in some way becomes trapped along with Tyler by reading Packing Inferno, we are traitors to humanity if we don’t.”
— Scott Ritter, Former Major, United States Marine Corps, and Chief Weapons Inspector in Iraq, 1991-1998

“Tyler Boudreau is the real deal. His personal story of what it’s like to know the ‘ground truth’ of the war in Iraq chills the soul. This is a must read for any of us who care about our country and our soldiers in harms way.”
—Max Cleland

“Eloquent, impassioned, written in the moments, written after, before, and around the moments, dripping with the blood of pain and seeking the blood of breathing, Boudreau has written from the zones of war under the guns and from the zones of war beyond the guns and from the zones of war in our hearts and minds — and in our memories and agendas — and he hasn’t just written from those realms, about the culture, the training, the killing, the being killed, the coming home and not being home, he has displayed it all, dissected it all, unmercifully and mercifully relived and explored it all. Only a human ostrich can avoid these truths — don’t be one. Read this.
—Michael Albert, Co-founder of Z Magazine and South End Press

“Tyler Boudreau lives now to help the rest of us see the monstrous face of war as clearly as he does. Alas, it is our own face, which we fail to recognize. This bravely truthful book is an urgently needed cure for America’s chosen blindness about the war to which this nation condemns its young.”
—James Carroll, author, House of War

“Tyler Boudreau has written a different war story which chronicles his journey of conscience. His feat is to survive the inferno of relentless anger to reach an understanding of what war entails. His is also an investigation into the morality of war, with all its quagmires and self-justifications. Soldiers must come to terms with their war to truly survive it, and Boudreau offers great insight into the hurdles facing returning veterans as well as advice for those who would help them.”
—Elise Tripp, author of Surviving Iraq: Soldiers’ Stories

“What do you get when you combine The Things They Carried and Dispatches with the unblinking, crystalline style of Friedrich Nietzsche? You get Packing Inferno. Boudreau has a gift for vivid scene and narrative pace, and brings those together with something very rare: an unblinking sight of what’s right and what’s not in this war, in his Marines, and in himself. There is a clarity in his words that will not leave you alone.”
—Jonathan Shay, MD, PhD, author of Achilles in Vietnam and Odysseus in America, MacArthur Fellow

“This book is angry and funny and insightful, about war and those whom war envelopes. It will bring knowing nods of recognition from veterans; it may shock others. To all of us, Tyler Boudreau offers a profound gift: the moral clarity we need to welcome the warriors back home.”
—David Bowne Wood, National Security Correspondent, The Baltimore Sun, author of A Sense of Values: American Marines in an Uncertain World