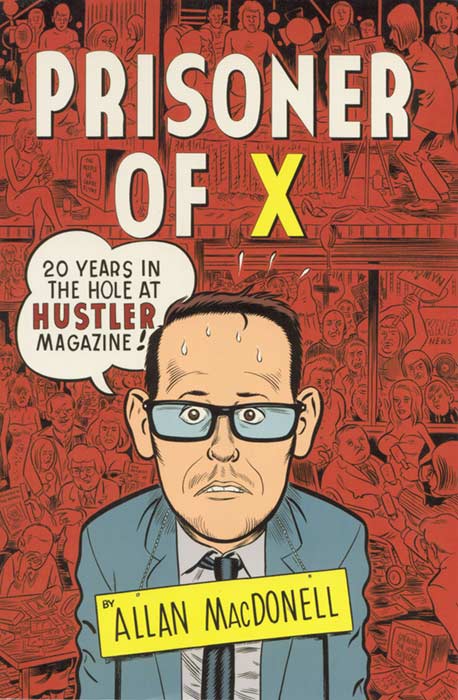 20 Years in the Hole at Hustler Magazine

Prisoner of X is a savagely funny odyssey through the bizarro world of Larry Flynt’s cracker-rich, X-rated empire.

Prisoner of X is a wildly entertaining memoir about climbing the bent and fearsome masthead of an infamous magazine, and the bittersweet reward of publicly crossing its hillbilly Caesar. Cover artist Daniel Clowes is the celebrated cartoonist and screenwriter of Ghost World and Art School Confidential.

“You expect shocking stories from a guy who spent 20 years working for Larry Flynt. And this memoir doesn’t disappoint. MacDonell recounts his career at Hustler – ‘not the vilest magazine on the market, but we tried’ – from proofreader to editor (until Flynt fired him in 2002)… The real shocker: Prisoner is surprisingly well written. MacDonell’s prose is so perky and witty, it’s a shame Flynt didn’t fire him years ago so he’d have a real career to write about.”
— Entertainment Weekly

“Yes, it was a dirty job, but he just had to do it… [MacDonell] spearheaded Mr. Flynt’s 1998 campaign to expose hypocrisy among Republican congressmen… and eventually brought about the downfall of Robert L. Livingston, speaker-elect of the House of Representatives.”
— New York Times

“Allan MacDonell worked for almost 20 years at Larry Flynt Publication … naturally, [he] has stories to tell, which he does with caustic wit in his memoir, Prisoner of X.”
— Los Angeles Times

“Prisoner of X is hours of guilty pleasure that pass like seconds. Here’s the unsafe, hook-up sex of memoir. You’ll need to indulge before the restraining orders pull this great book off of store shelves.”
— Chuck Palahniuk, author of Fight Club, Choke, and Haunted