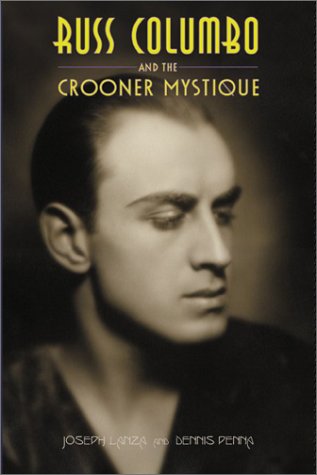 Russ Columbo and the Crooner Mystique

In the early ’30s, Russ Columbo, dubbed the “Vocal Valentino,” rivaled Bing Crosby in a widely publicized “Battle of the Baritones.” He had looks, charm, and a beautiful voice to match his violin playing. But his endearing aura also had a haunted side. Just two days after he attended a Hollywood sneak preview of the movie that gave him his first leading role, Columbo was killed by a wayward bullet—the climax in a chain of circumstances that were quirky, mysterious and sometimes downright maddening even after his death. In a narrative full of passion, as well as showbiz personalities like Pola Negri, Walter Winchell and Carole Lombard, Russ Columbo and the Crooner Mystique combines a remarkable collection of Columbo’s letters, diary entries, scrapbook clippings, and other personal effects—all woven with an intimate biography that also pleads the case for romantic balladeers.

“A fascinating biog of Russ Columbo, AKA the Vocal Valentino… The crooners have never really had their day… and most peoples’ knowledge of the form starts and ends at Bing Crosby, who, according to this, owed a stylistic debt to Columbo anyway. For fans of old hollywood, neglected music, haunted glamour and faded stars…”
— Sleazenation

“An exceptionally vivid, colorful, appreciative volume… Utilizing Russ’s own personal effects (including letters) and interviews, the authors have uncovered Russ the man, while authoritatively discussing his career on record, in films and on radio… (O)ne of the best books about a singer that I’ve ever read… Lanza and Penna give us a feeling of being there in the time period that Columbo was popular, and their discussion about ‘crooning’ makes for splendid reading… Russ Columbo finally gets the recognition he deserves… Terrific, often funny… it’s a very attractive volume and well written.”
— Laura Wagner, Classic Images

“A humdinger of a book that zings along clad in deep purple like a crooner ballad on wheels. A hell of a good read.”
— Ian Whitcomb

“This is the most comprehensive and deeply researched biography of the ‘Vocal Valentino’ or ‘Romeo of Radio’ ever written… The so-called ‘Battle of the Baritones’ is well-documented as is the whole of the singer’s all too brief career with its highs and lows…”
— Bob Deal, Memory Lane

“…a fascinating glimpse into the world of early 20th-century music and film… The period photos, supportive documentation and catchy wording add to the impact of this item…”
— Library Journal

“(S)trangely satisfying. It’s a great tribute to a great and underrated singer and personality.”
— Kim Deitch