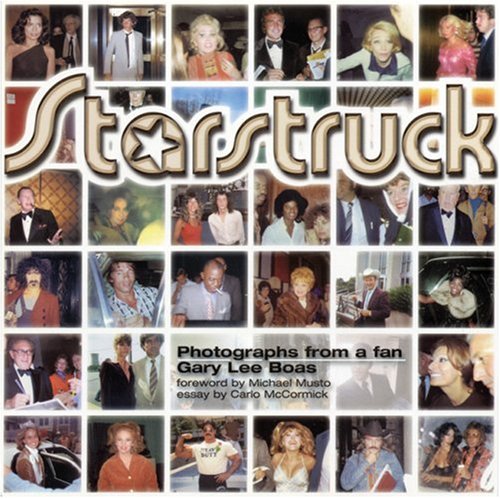 Photographs From A Fan

Alongside these candid, never-before-seen images of Marlene Dietrich, Andy Warhol, Dennis Hopper, Charlie Chaplin, Marilyn Chambers, and many forgotten and cult personalities from the era are Boas’s own insightful and astonishing observations of his interactions with the stars. The result is fascinating portrait of contemporary American culture, taken from the remarkable perspective of an unknown fan.

These photographs and stories, dating from 1966 to 1980, document with refreshing vitality a bygone era of glamour, fandom, and pre-paparazzi innocence.

About Gary Lee Boas
Gary Lee Boas grew up in Lancaster, Pennsylvania. As a fan, Boas began photographing famous people with his Brownie camera at age 14. Boas’ obsession has grown, uninterrupted, for 35 years, into a massive archive of over 80,000 photographs, autographs and artifacts. Since the release of Starstruck: Photographs From a Fan Boas has become an internationally recognized photographer. His images have been exhibited in major galleries and museums throughout the U.S. and Europe.

“Starstruck unexpectedly celebrates the beauty of the amateurone whose vocation is not driven by a hunger for money, but by love. The book is a breath of fresh air.”
— Warren Beatty

“Really fabulous…I could not put it down. I didn’t expect it would be such a great read, as well as, of course, being a profound social and cultural document.”
— Ken Coupland, Graphis