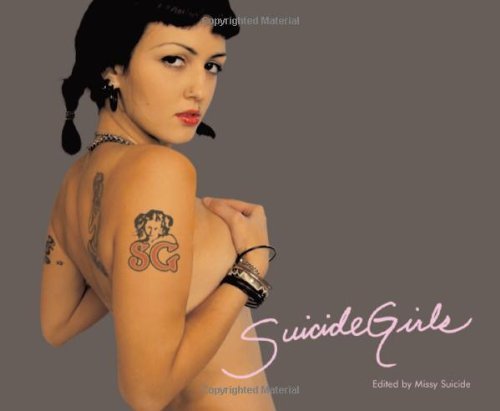 “Thank God someone has benefited from the internet. It’s not just ebay and Amazon. Somebody has made a name that’s not just monetary but a cultural icon.”
— Chuck Palahniuk, author of Fight Club

“This collection of glossy shots marks the second birthday of the near-legendary eponymous Web site founded by Missy Suicide (borrowing a little hipster terminology from a Chuck Palahniuk novel in the process) to promote her own pin-up photography, and to make a place where women could ‘be themselves.’ The large format book is well designed and finely printed, with over 150 full-color photos of Scarlett, Flux, Fractal and the rest of the pierced, tattooed, leather-‘n-lace-lovin’ gang. The bulk of the book consists of Missy’s portraits of the girls, but a section at the back allows the girls to speak for themselves through diary extracts, their own photos and their answers to questions like ‘How did you hear about SuicideGirls and what made you want to become one?’ As 25-year-old LE from San Francisco puts it, exposing herself in various ways on the internet is both ‘a hobby and an art form.’ The S-Girls are spirited, sans doute, and you have to applaud Missy for making such a go of something she loves…”
— Publishers Weekly

“(The book) is, like the site, done with taste as a higher priority than gratuitous smut. The pictures in the book, all taken by SuicideGirls founder Missy Suicide, or the girls themselves, can be teasingly suggestive, but they are just as often snapshots of engaging characters.”
— Mean Street