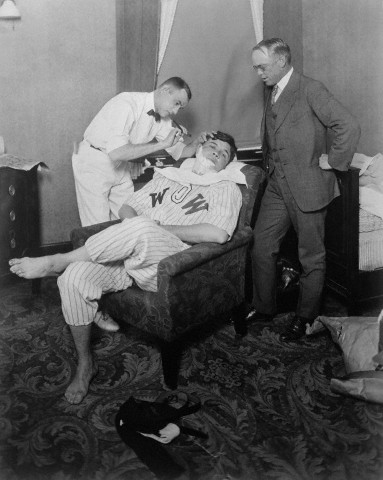 Take Me Out to the Masonic Ballgame 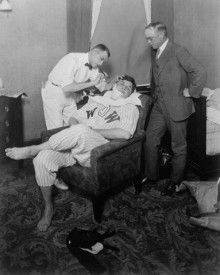 “I don’t get it,” my friend commented, as we broiled in the bleachers at a hot Sunday afternoon baseball game at Dodger Stadium. The sun beat down on us as we filled up with weak beer and bags of salty peanuts.

“Half the players are sitting in a dugout, and the other half are just standing around on the field. Last inning a batter grounded out to the first baseman, and he jogged into the dugout after two outs. Even the first baseman was so bored he couldn’t keep track of how many outs there were.”

My friend had a good point. Baseball is a truly dull game. But then millions of fans are not really there for the game, I think, but the ritual. All the fans gathered in the stadium, the organ music, the scorebook, the seventh inning stretch, the look and feel.

When researching the forthcoming book Ritual America it didn’t surprise me that freemasons, particularly one Alexander Cartwright, had a lot to do with the structure and format of the game. The format of the diamond-shaped field, the number of players, outs per inning, the ritualistic and static quality of it all.

In the ‘20s, Babe Ruth played on a team called “WOW,” standing for the fraternal order Woodmen of the World. Such a league wasn’t taken seriously, and was more or less a barnstormer act like the Harlem Globetrotters, and similar to the fun and games (but sometimes fatal) initiation ceremonies of these quasi-Masonic groups.

Take me out to the Masonic Game

Take me out with the fez-hatted crowd

Buy me some Peanuts and Cracker Jack

I don’t care if they saw me in half

If they don’t win it’s a shame

For it’s one, two, three strikes you’re out

At the old ball game