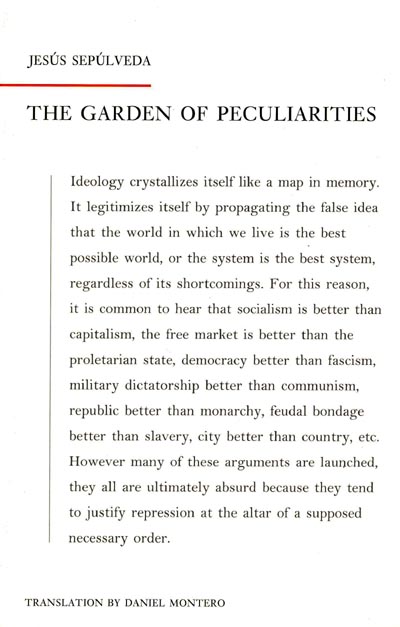 The Garden of Peculiarities

Jesús Sepúlveda is a Chilean green anarchist with roots in Spain, Italy and Eugene, Oregon. His important work is both critical and inspirational, a human- and plant-centered antidote to the globalist technocracy.

Appearing for the first time in its English language edition, The Garden of Peculiarities is considered by major anarchist thinkers to be the primary twenty-first century anarchist essay, in the way that Guy Debord’s Society of the Spectacle influenced political thought in the late twentieth century.

“If we are to survive, we must remember the wisdom in this powerful and poetic book. The Garden of Peculiarities will in time, I believe, become a classic. Jesús Sepúlveda shows us how to remember what we already know in our bodies.”
— Derrick Jensen, author of A Language Older Than Words

“Profundity is sometimes delivered in small packages. This is one of those times.”
— Ward Churchill, author of Acts of Rebellion

“In The Garden of Peculiarities, Jesús Sepúlveda intertwines the learned language of an academician with the common sense of a campesino, and the resulting philosophy is post-everything in its insistence on human experience and expectation as they evolved to be.”
— Chellis Glendinning, author of My Name Is Chellis and I’m in Recovery from Western Civilization

“We have needed The Garden of Peculiarities. Far from the constricted academic style, the counter-politics of Sepúlveda represents, as few texts do, the new emerging thought of Latin America, and it proves it is possible to build an anti-neoliberal and anti-globalization bridge between the First World and Southern Hemisphere societies.”
— Lagos Nilsson, author of Contracultura y provocación