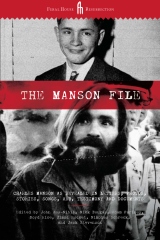 The Manson File caused a sensation when it first appeared in 1988 under the Amok Press imprint. Never before had uncensored source material from the Family itself become available in a commercially distributed book.

Now, under Feral House’s Resurrection series, here’s the entirety of a long out-of-print book, complete with Manson’s letters, spells, curses, artwork, lyrics, stories, and an essay on the power of evil, intended not for the public, but to influence his circle of followers. A picture emerges of what it was like to be part of Charles Manson’s Family, and the process of conversion to Mansonism.