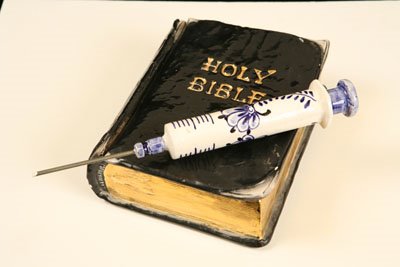 The Seattle Blow-Up Against Charlie Krafft

A city-wide alarm to inoculate do-gooder Seattleites from the moral depravity of artist Charles Krafft is being rung from the towers and issued by The Stranger, Seattle’s hip, politically active, gay-friendly weekly.

I’ve been friendly with Mr. Krafft since the mid-’80s when he published the first review of my book Apocalypse Culture when the bigger New York publications froze out reviews based on reactions to an article I had written called “Aesthetic Terrorism,” which appeared to step on sensitive toes of the New York art culture. The same publications who killed several reviews later referred to Apocalypse Culture as a “provocative,” “controversial,” and “best-selling phenomenon.” Early on, Charlie Krafft wrote a review in some friend’s art magazine. Unlike the art-cloistered New Yorkers, it was sophisticated in its open-mindedness.

Since I’ve known him, Krafft got bored with and dispensed with his Buddhist figurative art, taking up lowbrow parodies, and then moving into ceramic delftwere he learned at the hands of blue-haired grannies in the Netherlands. He called his pieces “Disasterware,” and they were often brilliant.

I exhibited Charlie’s work in an LA group show called “Tortures and Torments of the Christian Martyrs,” and in the mid-90s, along with Larry Reid, Charlie helped me secure the exhibition space at The Center of Contemporary Art in Seattle across from the Seattle Art Museum for my “Cult Rapture” exhibition, which was both loved and hated for being more sociological than artistic.

Charlie’s been one of the most curious and well-read of my friends, and though he fails to trumpet this characteristic of his, also extremely inclusive of friends. While Charlie spends time in India for its Kumbh Mehla festival, an African-American friend of his now occupies his Beacon Hill house, availing himself of Charlie’s ceramic ovens. While crashing at his house a few months ago, I met a couple Latino skateboard buddies of Charlie’s as well. His current girlfriend helped edit and put together a Black Panther history book called Get Whitey. If Charlie Kraft is a “white nationalist” or “neo-Nazi,” he’s obviously a big failure.

It appears that Charlie lost control of his Facebook page, which was often hijacked by a couple mental cases who spoke of “kikes” and such, with some of those comments directed at me. Once at a dinner I served Charlie at my Port Townsend house, he spoke of me being “chickenshit” for belittling his conspiratorial views of Judiasm, and for remarking that Jews would indeed be a super race if they could indeed control all he claims. Apparently this “chickenshit” insult was directed at him by a “white nationalist / holocaust revisionist” on some or another stupid radio blog. Unlike the woman who hosted the show, Charlie spoke his name, and until recently, revealed his physical address online. It seems that Charlie just didn’t give a shit about this kind of thing.Unfortunately Charlie is more than a bit self-defeating in his stubbornness.

Feral House doesn’t shy away from points of view we don’t necessarily agree with, and so do some of our friends. Despite his occasional idiocy, we love Charlie Krafft.