The Untold Story of Father Yod, YaHoWha 13, and The Source Family 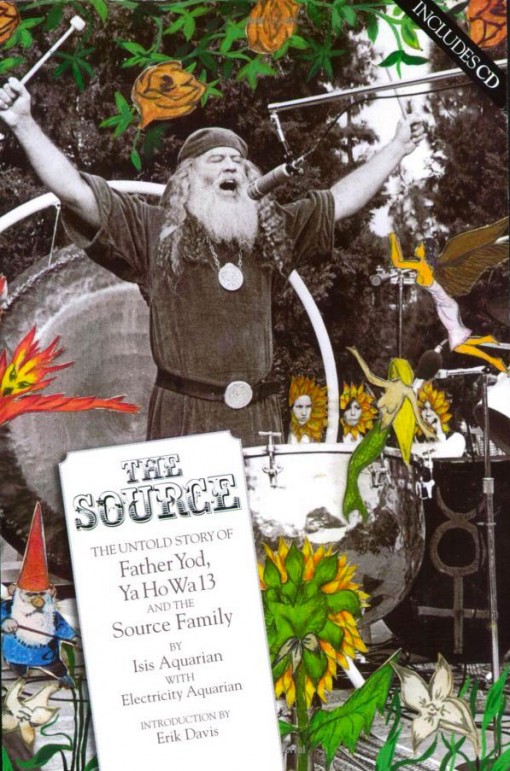 View the The Source press page.

See more about The Source Family.

It was 1972, time of the cult-occult-commune explosion. By day, the Source Family served organic cuisine to John Lennon, Julie Christie, Frank Zappa and others at the famed Source restaurant. By night, in a mansion in Hollywood Hills, they explored the cosmos through the channeled wisdom of their charismatic leader, Father Yod. Father was an outlandish figure who had 14 “spiritual wives,” drove a Rolls-Royce, and fronted the rock band Ya Ho Wa 13, now considered by collectors to be one of the most singular psychedelic bands of all time.

The Source Family’s true story—kept secret for over 30 years after Father’s spectacular hang-gliding death in 1975—is revealed here by the Family members themselves, with over 200 photographs and a full-length CD of rare Ya Ho Wa 13 live performances and Family recordings.

“This story is just so good, so monumental—I just do not want to give away a stitch of it. If you are even minorly interested in messiahs, magic, psychedelic bigamy, divine rock freakouts, nature, or benevolent cults, run don’t walk to get this.” — Arthur Magazine

“… a book that has become THE talk of the town….”— Ann Magnuson, Paper Magazine

“While the boho scene has never completely disappeared from L.A., Father Yod and the Source Family are enjoying a new era of notoriety, inspiring indie-folk musicians like Devendra Banhart and mega-producers like Rick Rubin. Aquarian’s book has become a style bible of sorts, with its dreamy images of the comely cult.” — T-Style, The New York Times

“…the Source Family has the best album covers hands down! Creation at its purest, just being, present as can be, letting the unknown unfold, Raw as the Stooges wasted on Ataraxia, free as the Santa Ana Winds, and rare as an astral encounter with the powers of creation, from Kohoutek to Operetta, the wild saga neverendlessly flows!” — Devendra Banhart

“Usually, accounts of communal spiritual movements are sensationalistic “exposés of brainwashing cults” or whitewashing “defenses against prejudicial conspiracies.” The Source: The Untold Story of Father Yod, Ya Ho Wa 13 and the Source Family is something else. The participants in this story seem uniformly intelligent, straightforward and better off for their brush with the infinite.” — Doug Harvey, LA Weekly

“The Source Family contributed a powerful chapter to our communal history, and having Isis Aquarian’s empathetic recording of it enriches us all.” —Timothy Miller, Author of America’s Alternative Religions