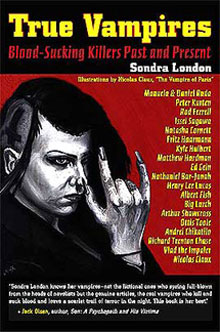 Blood-Sucking Killers Past and Present

Some vampires are not fictional creatures. This book examines the real vampires whose crimes have contributed to the fearsome mythos. True Vampires takes you into the minds of real blood-sucking killers from Romania and Russia, France and Wales, Brazil and South Africa, to the hills of Kentucky and the streets of Los Angeles.

The history of the vampire mythos is traced from Jesus Christ urging his followers to eat his flesh and drink his blood, to the legendary exploits of Vlad the Impaler, Countess Bathory, and Sawney Bean. Ancient tales of the accursed undead rising from the grave are given new life when compared with modern accounts of persons approaching burial who suddenly sit up and ask for a drink of water.

Sondra London, also the co-author of The Making of a Serial Killer, explains how the seductive appeal of the commercialized vampire image acts as a “media virus” and contributes to a widespread desensitization toward a truly horrific level of personal violence.

The Ultimate Vampire of contemporary variety is revealed to be Nicolas Claux, otherwise known as “The Vampire of Paris.” This notorious blood-sucking killer is also a talented artist, and as such, Claux has lavishly illustrated this book with a series of striking oil portraits of vampire killers, and his Oath to Satan, inscribed and sworn in his own blood while he was imprisoned for murder.

“Creepy as the topic may seem to some, this book is the best overview of the subject to find its way into print to date. London has corresponded with and interviewed several incarcerated murderers, some of whom consider themselves to be vampires, and the book contains numerous illustrations of bloodsucking serial killers rendered (quite artfully, really) by Nicolas Claux, aka “The Vampire of Paris.” …If you crave depictions of severe depravity and mental illness, this book is your ticket to wallow in the bloody mire.”
— Dennis P. Eichhorn, SCRAM

“Anyone who cherishes the comforting belief that blood-sucking fiends are simply a figment of the Gothic imagination will never sleep peacefully again after reading Sondra London’s encyclopedic survey of the vampire phenomenon. Covering every aspect of this darkly fascinating subject—from myth and folklore to history and psychology—her book is at its unnerving best in revealing the existence of the monsters among us: those real-life beings possessed by an unslakable thirst for human gore. Even the most widely read true crime aficionado will learn something new and shocking from virtually every page of this astonishing volume. London has produced a classic of the genre.”
— Harold Schechter, Author, Depraved, Deviant, Deranged

“If you’ve ever wondered if vampires really exist in human form, Sondra London has written the book for you, and it is an absolutely absorbing read. The current crop of menacing blood drinkers are all here, real life killer vampires lurking in the shadows of cemeteries and prison cells from Florida to Paris, along with such legendary vampires of the distant past as Peter Kurten, the Vampire of Dusseldorf; and Britain’s monstrous John George Haigh. Reading London’s riveting and forceful study of the vampire netherworld is an adventure you shouldn’t miss. But beware: You may never sleep with the light off again.”
— Clifford Linedecker, Author, Modern Vampires

“Sondra London knows her vampires – not the fictional ones who spring full-blown from the heads of novelists but the genuine articles, the real vampires who kill and suck blood and leave a scarlet trail of terror in the night. TRUE VAMPIRES isn’t for the squeamish, but connoisseurs of true crime will find it almost too good for the genre. Behind her splashy and sexy facade, Sondra London has always been a superb journalist and writer. This book is her best.”
— Jack Olsen, author, Misbegotten Son, The Last Man Standing

“Vampires ought not to exist – that is a statement with which every sensible person will agree. Yet the research of Sondra London has revealed that on this matter, common sense is mistaken. Her account, which is destined to become a classic of the literature, ranges from Hungary in the 17th century to America in our own time, leaving no doubt that vampirism is more than a superstition – more, even, than a rare psychological illness: it is a reality that deserves to be taken into account by all students of paranormal research. The author, best known as a fine criminologist, here reveals herself as a remarkable historian.”
— Colin Wilson, Author, Encyclopedia of Unsolved Mysteries, The Occult

“Prodigious research and compelling prose make TRUE VAMPIRES Sondra London’s most impressive work to date. If you believe bloodsuckers dwell only in myths and movies, think again. This is the ultimate insider’s view of a ghastly subculture as real – and as deadly – as it is difficult for “civilized” minds to conceive. London rips the lid off, and you won’t like what you find inside, which makes it all the more imperative to face the grisly truth.”
— Michael Newton, Author, Encyclopedia of Serial Killers

“An informative, chilling look deep inside a dangerous psychological subculture most of us wish didn’t exist. In True Vampires, author Sondra London travels a harrowing road many would fear to tread.”
— Maury Terry, Author, The Ultimate Evil

“Did a contemporary Cambodian vampire drink his victims’ blood to cure himself of AIDS? Is one of Japan’s foremost writers guilty of once having killed and devoured a college coed in Paris? Was the Russian monster known as “Iron Teeth” fond of human-flesh stews? These are among the myriad of intriguing questions answered in Sondra London’s masterpiece, True Vampires, a genuine work of high scholarship on this sanguinary subject. While her focus is on modern hematophiles, she spans the corridors of time to unearth vampiric themes throughout history, such as Jesus’ admonition to his disciples to eat of his flesh and drink of his blood, the unholy crimes committed in 1400 Scotland by a clan of flesh-ingesting cave dwellers, and the despicable acts of Hungary’s female vampire, Countess Erzsebet Bathory! And, to top it off, London’s index is a most comprehensive guide to the absorbing contents contained within! Accordingly, this book carries my highest commendation!”
— Dr. Franklin Ruehl, Ph.D. Host/Producer of the cable TV series, “Mysteries From Beyond The Other Dominion”

“Vampires exist! They’ve been among us for centuries, and theyâre hiding in plain sight today. Sondra London proves it beyond a reasonable doubt in this incredible work of investigative reporting, historical sleuthing and forensic interpretation. Beginning at the intersection of mythology and the latest headlines, she follows the trail of historyâs most monstrous killers around the world, and finds the connections as few have dared and too many have overlooked. This is a scary stuff! A frightening, fascinating page-turner that drives a stake into the heart of disbelievers, turns true crime into literature and somehow even humanizes the hideous criminals who are driven by a bloodlust they can’t control. With TRUE VAMPIRES, Sondra London has unleashed an unholy Bible that criminologists, journalists and historians will use as a textbook, and she shows the world the talent and courage that many in the journalism field have known about for years.”
— Burt Kearns, Author, Tabloid Baby, Documentary filmmaker

“Far from the sensual, seductive image of the vampire made popular in romantic fiction and motion pictures, there lies a dark and dangerous being, monstrously human, rather than preternatural. The real vampires among us are not harmless, role-playing “Goths” with their fake fangs, swirling capes, and whitish, “undead” makeup, who attend nightclubs where every night is Halloween, but individuals who truly thirst for blood and do not hesitate to take human life to satisfy this perverse need. The traits of the real vampire may also include a ghoulish fascination with corpses and even a taste for human flesh. We are fortunate to have such a guide as Sondra London to keep us on a safe passage through a world that is nightmarish, grisly, gruesome, and all the more frightening because this book is not merely the creation of an imaginative author who wants to give us a good scare, but the product of a darn good investigative journalist who warns us that there are, indeed, real vampires.”
— Brad Steiger, author, The Werewolf Book: An Encyclopedia of Shapeshifting Beings