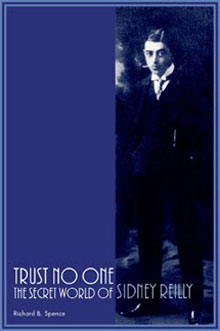 The Secret World of Sidney Reilly

By Richard B. Spence

Trust No One, Richard B. Spence’s exhaustive volume about one of the most enigmatic and mysterious figures of the twentieth century, accesses new material from both Russian and British intelligence, and corrects decades of disinformation from every political side of the capitalist/communist equation.

Sidney Reilly spent most of his life in the shadows of international intrigue and counted among his legion of friends, victims and accomplices the likes of Rasputin and Churchill. He often is portrayed as a master spy, a “man who never made a mistake”—the living prototype of James Bond. But Reilly’s real exploits exceeded anything credited to fictional Bond. Born into a Polish Jewish family as Salomon Rosenblum, he embarked on an amazing, daring and often bewildering career in which he assumed the persona of an Irish-named British gentleman along with many other identities. He was a slightly different person to every man who knew him and every woman who loved him.

Using “the System” (betting on all sides while manipulating the odds to maximize his own profit), Sidney Reilly was as much a master criminal as spy and amassed a fortune through the ruthless bartering of influence and information. He was employed and feared by capitalists and commissars alike. Was he a dedicated anti-communist, the Soviet’s first “mole,” or simply an unscrupulous con man? Even his end is an enigma: did the Soviets shoot him in 1925, or did he live to scheme on for many years to come? Reilly’s career offers a window into the pre- and post-WWI era’s secret underworld of political and economic intrigue and reveals a side of recent history that most works overlook or avoid.