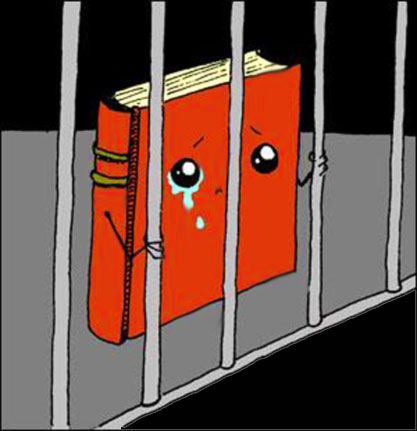 From September 21 to 27, the American Library Association presents Banned Books Week to draw “national attention to the harms of censorship.” This event is also sponsored by publishers/distributors Random House and Perseus Books Group.
Articles that promote this event highlight popular bestsellers by Kurt Vonnegut, J.D. Salinger and other media stars that have been excluded from some library or class… But what about actual books that dare not even get ordered by sanctimonious bookstores or libraries? Or ones that touch on political and cultural issues that seem too “risky” or do not sell well enough to deserve the attention of the American Library Association or Random House?
Feral House has had some experience with book bans.
The Oklahoma City Bombing and the Politics of Terror by the late David Hoffman was sued into non-existence by the Deputy Chief of the FBI (Oliver “Buck” Revell). A Feral House satirical book called Cad: A Handbook for Heels was seized from a Canadian lesbian bookstore due to book-banning laws promoted by Catherine MacKinnon and Andrea Dworkin. An article I wrote about Ms. Dworkin around this time became subject to a trial in Bellingham Washington when Jim Goad’s ANSWER Me! magazine (Issue 4) was seized by outraged feminists. Russian translations of Feral House books Extreme Islam, Apocalypse Culture and Apocalypse Culture II were seized, banned and burned in Russia. Incidentally, its publisher (Ultra Kultur’s Ilya Kormitsev) died a horrible death soon after these books were banned…
Most recently there has a been a call to ban and burn the satirical Feral House book Hipster Hitler. You can read about this here:  … the irony of the call to ban and destroy this satirical tome is just too fucking much.
All this makes me wonder: what is Banned Books Week? Is it how the American Library Association and the largest publishers praise themselves but dare not touch upon other sorts of bans?