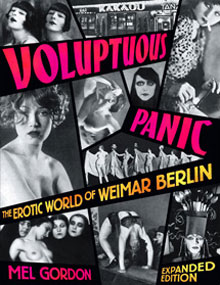 Back in print! Available in deluxe paperback edition.

“Voluptuous Panic is simultaneously appalling and thrilling, repellent and seductive, grotesque and gorgeous—not a coffee table book. It would go better with absinthe drunk from a human skull.”
— Gary Meyer, Clean Sheets

This sourcebook of hundreds of rare visual delights from the pre-Nazi, Cabaret-period “Babylon on the Spree” has the distinction of being praised both by scholars and avatars of contemporary culture, inspiring performers, filmmakers, historians straight and gay, designers, and musicians like the Dresden Dolls and Marilyn Manson.