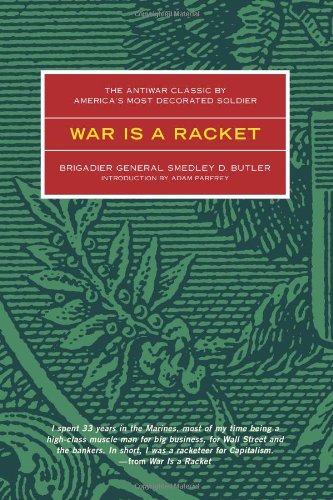 War is a Racket

The Anti-War Classic by America’s Most Decorated General

Originally printed in 1935, War Is a Racket is General Smedley Butler’s frank speech describing his role as a soldier as nothing more than serving as a puppet for big-business interests. In addition to photos from the notorious 1932 anti-war book The Horror of It by Frederick A. Barber, this book includes two never-before-published anti-interventionist essays by General Butler. The introduction discusses why General Butler went against the corporate war machine and how he exposed a fascist coup d’etat plot against President Franklin Roosevelt. Widely appreciated and referenced by left- and right-wingers alike, this is an extraordinary argument against war – more relevant now than ever.

“Butler is scathing in his description of how the U.S. government wasted the lives of those soldiers who died but also of those who survived… A stunning condemnation of U.S. militarism and it ends with a demand that rings true down to today – ‘To hell with war.’”
— Ashley Smith, Socialist Worker

“America had seen its own attempt at a Fascist coup. Why, then, is this incident in U.S. history not better known? Why don’t children learn in school about the plot to seize the United States government?… The time has obviously come for Smedley Butler to have his moment in the sun. Butler’s attack on the military-industrial complex does more than expose war for the racket it is: It also gives the antiwar movement unmatched credibility.”
— Ken Mondschein, corporatemofo.com

“There is little likelihood one will encounter a putdown and discounting of armed service, while questioning the reason for it, by a top experienced commander, anywhere within a light year of Marine General Smedley D. Butler’s WAR IS A RACKET. And there is utterly nothing comparable to the grim anthology of photographs devoted to the unspeakable hideousness of the bloody gore of modern – since Napoleonic times – warfare, THE HORROR OF IT. The American public recoiled from these two works when they were published, in close sequence, two generations ago… We can hope that this dual masterpiece at hand, in quite a different context, does a better job of reducing the level of ignorance.”
— James J. Martin