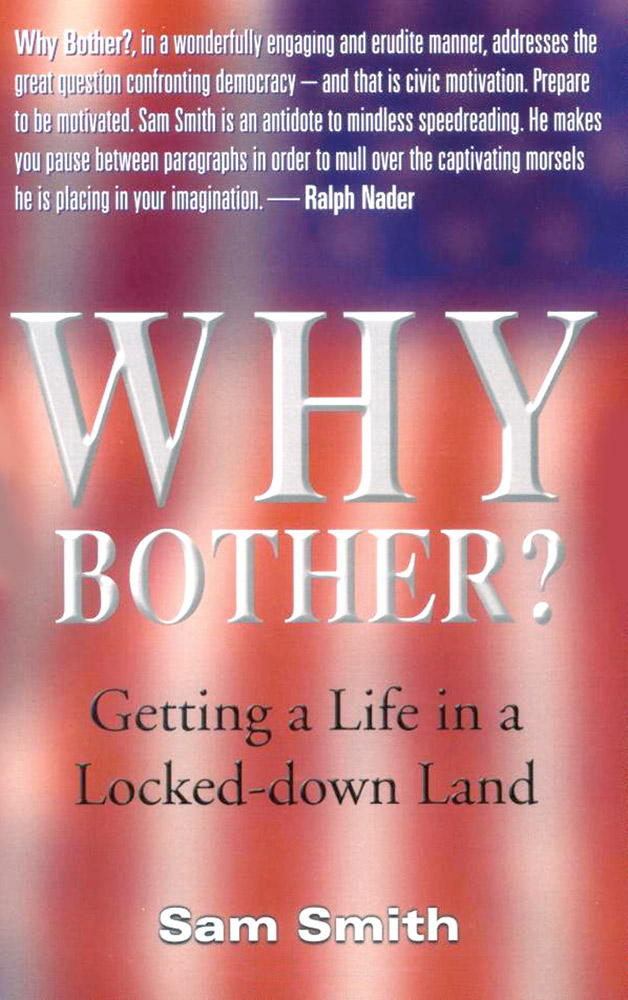 Getting a Life in a Locked-Down Land

Many of us feel like fugitives from the media-driven stereotype of a booming country composed of compliant consumers. Where are the seekers, the free thinkers, the advocates, the rebels?

In this brutally honest love letter to the individual, to freedom, to life itself, longtime alternative journalist Sam Smith takes on our political alienation and makes it personal. How can the thoughtful and creative individual coexist with our mega-corporate culture? Drawing from philosophy and anthropology to the internet and punk ‘zines, from Kierkegaard to Humphrey Bogart and Rage Against the Machine, Smith speaks to despair, personal rebellion, suicide and false faith, the loss of democracy, and what to do when nobody cares whether you do it or not.

Describing despair as “the suicide of imagination,” Smith writes, “the task is to bear knowledge without it destroying ourselves, to challenge the wrong without ending up on its casualty list.”

Sam Smith is the author of Sam Smith’s Great American Political Repair Manual (Norton) and Shadows of Hope: A Freethinker’s Guide to Politics in the Time of Clinton (Indiana University Press), and runs The Progressive Review (Washington’s Most Unofficial Source).

“Why Bother?, in a wonderfully engaging and erudite manner, addresses the great question confronting democracy—and that is civic motivation. Prepare to be motivated. Sam Smith is an antidote to mindless speedreading. He makes you pause between paragraphs in order to mull over the captivating morsels he is placing in your imagination.”
— Ralph Nader

“Sam Smith is a larger-than-life presence in the nation’s capital… A truly original voice in American journalism: humorous and plain-spoken and filled with common sense.”
— Jay Walljasper, Utne Reader