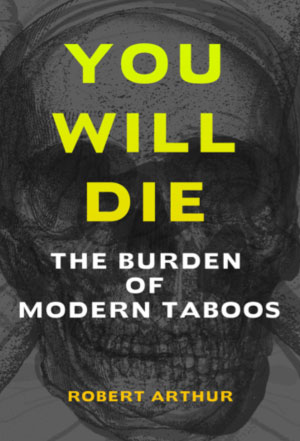 The Burden of Modern Taboos

A book that vigorously defends heroin users and sex workers? In You Will Die: The Burden of Modern Taboos Robert Arthur does that and more to demonstrate that taboos are not relics of primitive societies. America has its own ridiculous phobias and beliefs that cause everything from mere tedium to suffering and death. The government and the media use these taboos to lie and mislead. It is not a conspiracy, but by pushing panic for votes and viewers they thwart our pursuit of happiness.

You Will Die exposes the fallacies and the history behind our taboos on excrement, sex, drugs, and death. Arthur uses racy readability and rigorous documentation to raze sacred shrines of political correctness on the left and of conventional wisdom on the right. From the proper way to defecate to how to reach nirvana, anticipate the unexpected. It is not simply a novel exploration of sex and drugs, but also of individuality, liberty, and the meaning of life. You Will Die gives readers a new way of seeing their world and allows them to make a more informed choice about living an authentic life.

Winner of the 2008 Montaigne Medal awarded for most thought-provoking independent book.

“… ya gotta fight back against the Sarah Palin ‘idiot herd’ with something.”
Wayne Coyne, Lead Singer, The Flaming Lips

“… one of my favorite books …”
Mark Frauenfelder, Editor, Boing Boing

“This book is a MUST READ! I loved it.”
Dr. Mark Benn, Psychologist, Colorado State University

“Points such as the fact that most prostitutes are not drug addicts and that many actually enjoy their work, or the argument that the reason illegal drugs are so deadly is because they’re illegal, won’t sit well with those firmly entrenched in their beliefs, but Arthur’s richly researched and readable treatise will give those open to other positions plenty to think about in this heavily annotated volume.”
Publisher’s Weekly

“YOU WILL DIE is filled with facts and anecdotes, all placed in proper illuminating context to elevate this well above some compendium of trivia as it carefully makes point after point in favor of logical thinking and examination over right-wing knee-jerk hysteria. And it does so with a sense of humor and style that never devolves into a breezy, smartass, soapbox forum. Having held positions as a teacher and public defender he’s hardly a gutter apologist for the liberal lifestyle, instead concentrating here on how fear and hypocrisy are much more dangerous than the fall guys they manufacture. And making the reader think in the process. I cannot recommend this book highly enough.”
– Tom Crites, Paniscus Review