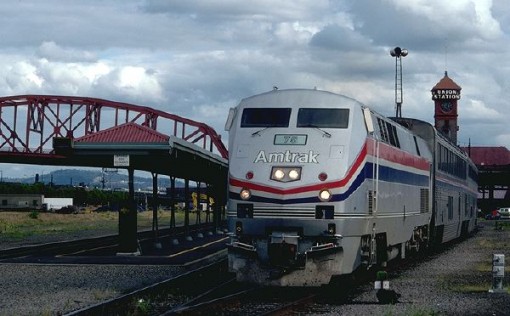 Portland on the Fly

We’ve taken this before on many occasions. The train from Seattle to Portland. The slowness of it, the views through the morning gray, the terrible coffee. It was always kind of wonderful, despite not being able to open windows like Amtrak’s European cousins.

This recent trip, though… oh, the humanity!

I was seated in Car 7 on the aisle in front of a yowling Polish family… how did Amtrak cram so many people on one aisle? Where I was sitting, a very nice but P.T. Barnum-sized woman also took up half of my seat. Could this have been some sort of reality show?

The restroom on this and surrounding cars were flooded with urine, diarrhea and soiled toilet paper … even the car with stale bagels and bad coffee was packed tight with passengers trying to escape the bad scene.

We finally arrived some four and a half hours later at the Portland destination. Everyone speaks of the gentrification attacking Portland, but as yet, it has not seemed to reach the train station’s surrounding blocks where homeless beggars wreak vengeance on passersby as retribution for their poor life experience.

This trip to Portland did not start off well, but picked up after we met with four different Feral House authors. Why so many writers this town? It’s unplanned, I can promise you that…

Markus Wolff and I spoke about his coming book about the remarkable German artist Fidus and his back to the land compatriots. Can’t wait for this.

Then Phil Stanford (of White House Call Girl fame) brought up his research for his coming title about the time in Portland when it was run by corrupt cops and mobsters. Now that’s the true Portlandia.

Then the delightful Jennifer Robin took me around to dive bars downtown as we spoke of her book describing conspicuous human traffic in all areas of Portland.

The next morning long-time friend Jerry A. (of Poison Idea) caught me up on his long-gestating memoir of rock and roll weirdness. He gave me two pins. One says “Pig and Jerry, Not Fred and Carrie”… I put that on immediately in respect of Tom “Pig” Roberts and the remarkable Jerry Lang who offered vocals for some of my SWAT and Tards recordings.

The train ride back North to Seattle wasn’t much better than the one South. Why has Amtrak become the new Greyhound?