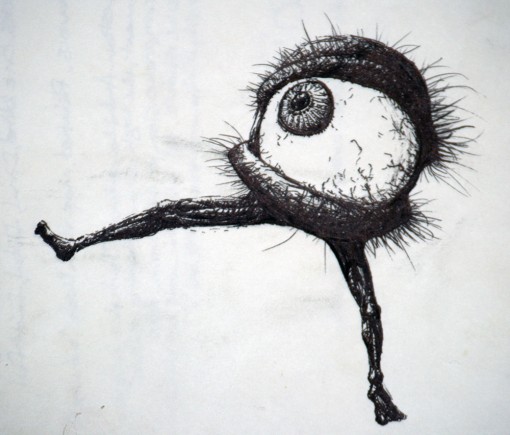 The nasty reality of the publishing business was revealed to me when I labored for New York’s Strand Bookstore. My job involved hauling “review copies” downstairs to the book buyer. It was overwhelming to see all the garbage launched onto the planet in the form of a printed book. This was the publishing and resale business up close and ugly, and I could not help but become cynical and dispirited by it all.

Is this where my fellow humans received profound helpings of information and creativity? God, I hope not. I owned remarkable examples of the printed book, and knew they had the possibility of being far more interesting.

Fortunately we were introduced to friend of a friend (thanks Georganne Deen!) who I convinced to assist me with publishing more intriguing titles than the horrible norm. For the next couple years we began an imprint called “Amok Press.” After Amok Press had its run, I moved to the West Coast from NYC and started Feral House in 1989.

Feral House became identified as a company that largely did dark, nasty, and conspiratorial stuff, and became a kind of publishing testing ground. In time other publishers —big and small — started to do Feral House variants once we proved that it was possible to do so. One of the founders of another firm said his company was founded to be a “better branded” Feral House.

Still, there’s a wide world out there, and most of the time Feral House was first and best. Throughout the years, when Feral House showed its wares at publishing conventions, many bookstore owners would look at our table, and give us the hairy eyeball as they moved on down to get their Suzanne Somers cookbooks signed.

Few people might believe this, but my interests run further afield than death, corruption, violence and insanity. A decade ago we founded the imprint Process Media with Jodi Wille as a forum for other sorts of books, many those in the realm of self-reliance, unorthodox lifestyles and books that undemonized the idea of “cults” and drug-taking. Though Jodi is now primarily involved with filmmaking (you should see the remarkable documentary, The Source Family, that she co-directed with Maria Demopoulos), Process Media continues on strong as ever.

Process’ most recent title, Power of the Seed, by Port Townsend native Susan M. Parker, is an amazingly clear Self-Reliance Series book on the true idea of what “essential oils” are and their creation (it’s decidedly not what you purchase at the supermarket or Body Shop).

The book has just rolled in from the printer, and is now available here.  A great video for it is coming next week!

Next week we also will introduce the new Feral House book, Pulp Macabre: The Art of Lee Brown Coye’s Final and Darkest Era edited by Mike Hunchback and Caleb Braaten (and co-published by the great Sacred Bones Records). The books have finally rolled in despite the strike at US’ West Coast ports!

This morning we heard the sad news of the passing of actor Leonard Nimoy who worked, non-Spock like, with my own long-gone father in The Man From UNCLE (The Project Strigas Affair) and a Henry Fonda tv-movie called The Alpha Caper. My father enjoyed acting with him a great deal. May he rest in peace.