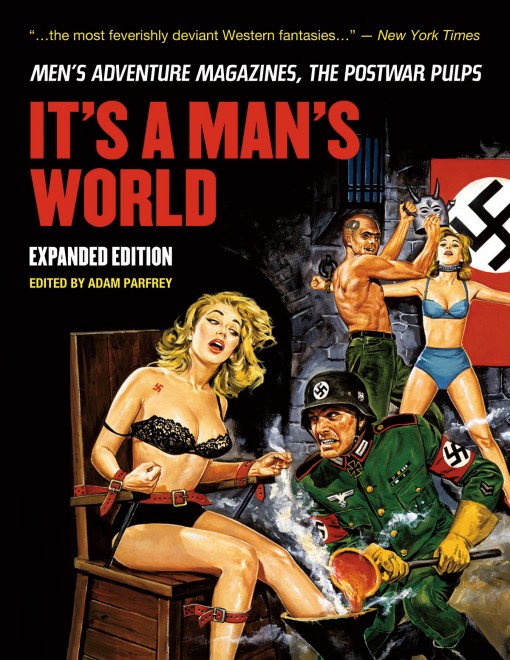 Feral House first published It’s a Man’s World in 2003 to reveal the parallels between propaganda for the ill-fated Iraq War and the iconic adventure magazines published in the ‘50s and ‘60s.  Additionally this book rediscovered the original era’s bizarre illustrations and articles.
We rediscovered the era of manly men and their battles against vicious weasels, wild women, street criminals and sinister foreigners. These mags were all so weirdly far out that a number of contemporary magazines were inspired to pay homage (tongue firmly in cheek) with similar illustrations. A couple years later, a well-known publisher felt the need to publish a copycat edition of Feral House’s iconic release.
One thing this other publisher’s book did not have were images and articles by the editors, writers and illustrators of these mags, or even a collector’s guide to these men’s magazines. Hear from Bruce Jay Friedman, Mort Künstler, Josh Alan Friedman, Mario Puzo, Norm Saunders, and David Saunders.
It’s a Man’s World has now returned in a colorful Expanded Edition that includes a large chapter of wartime advertisements that specifically fomented the hideous caricatures of America’s enemies, and violent wishes for their extermination. It’s all pretty damn weird, and it’s now available from Feral House.
If you want a copy signed by editor Adam Parfrey please request the signature when you order a copy from Feral House directly. (You can do that here: https://feralhouse.com/its-a-mans-world/)
See the video trailer here:  https://youtu.be/13jPYX9Iqig