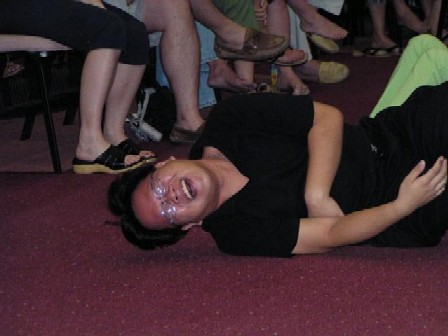 At the local Goodwill up here in Port Townsend WA there are several aisles of books: Fiction, Non-Fiction, Children, Self-Help, and then one devoted to Religion which usually contains variants of the holy bible and its concordances, and sermons by popular preachers.
One book caught my attention the other day, a large dust jacket-free hardcover with the title on its spine: Speaking in Other Tongues: A Scholarly Defense. Yes, an 840 page book that investigates the phenomenon of Pentecostal glossolalia from the point of view of true believers. Whereas one might initially dismiss Pentecostal belief with its snake handling, spirit-filled tongue-speaking and rolling around the church aisles as some sort of phenomenon of deep South swamplands, here’s a scholarly defense as published in 1986 by a Pentecostal Seattle church from local Seattle, a town largely composed of all-too-sensible caucasians of German or Nordic backgrounds.
So this book tells these people how to rationalize a phenomenon that otherwise seems so wild and irrational.
The same afternoon I found the Speaking in Other Tongues book, I also came across a full-sized organ, the Wurltizer Hohner Omni 2000 that hopefully inspired tongue-speaking locals to writhe on the ground, and become inspired by the holy spirit. According to someone online, “This series of Hohner organs was introduced in 1983 … there are two types of synthesizer present: organ voices that can be layered in any combination … and synthesizer presets that cannot be layered.” It came with a seat. Great condition. God-empowered. Cost: $44.95.
Who knows what might occur at Feral headquarters in Port Townsend some holy evening soon.