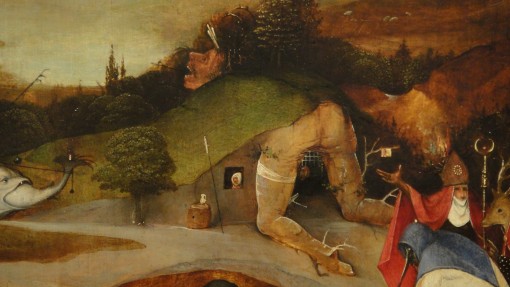 People often ask me about what most influenced me to publish the kind of books we do. For example, what does Joe Coleman’s cover art for Apocalypse Culture resemble?  Nothing less than the work of Hieronymus Bosch I think. And when we heard of the one of a kind exhibition of Bosch’s work in his hometown museum, we made plans to fly to the Netherlands to see it in person. We’ll be sure to provide a first-hand report after attending the Het Noordbrants Museum later this month.

Being April, we just got past the birthdays of Feral House author Anton Szandor LaVey on the 11th, and my own on April 12. It’s a Church of Satan tenet that one’s birthday is the most important holiday for any particular personality… I also remember Anton speaking about the importance to him of Bosch paintings in addition to noir movies in his life. The evocative poster for the movie Nightmare Alley hung in the famous black house, and he named his children and grandchildren after the movie’s characters.  One shortcut to discovering the particular books that most influenced the Black Pope is the annotated bibliography seen at the conclusion of his Satanic Witch.

When people want to insult Anton they call him a “carny.” Frankly, his carny background elevated him in my eyes. Being a carny spoke to the way Anton could read human personalities, and  in addition spoke to his love for wild beasts.

I’m still sad that Anton passed on, as I would have loved to have spoken to him of our new titles, particularly the Priestess of Morphine, and then later about the fantastical paintings of Hieronymus Bosch. But we’ll do so right here in a later edition of Feral Friday.