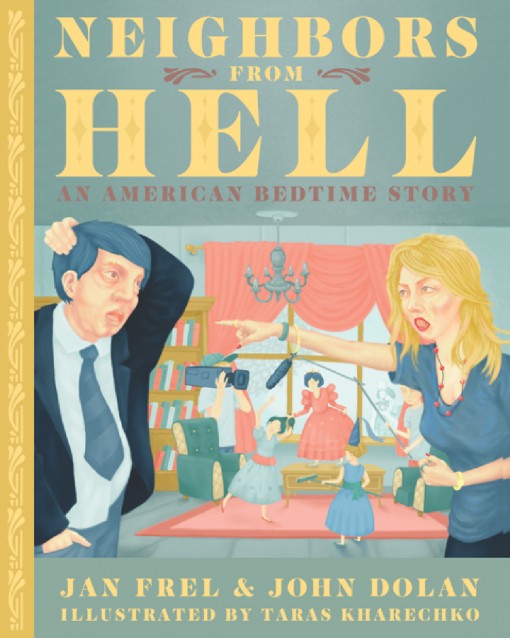 Are y’all familiar with “The War Nerd”? It might be the most brilliant column available. Do yourself a favor and Google it.  “War Nerd” is written under the pseudonym Gary Brecher, whose actual name is John Dolan, the co-author (with Alternet’s Jan Frel) of Feral House’s first and only children’s book, Neighbors From Hell: An American Bedtime Story.
Well, I suppose you could say it’s a children’s book, but best presented to children who understand and love vengeful political satire. It’s the true story of American behavior and it really should be told to every misguided child.
Finally arriving from the printer, cases of Neighbors From Hell have finally appeared at headquarters out here, and now it’s also available for all interested readers. You can order it from Barnes and Noble, Amazon, or indie stores far and wide. And from Feral House directly this weekend.
A preview of Neighbors From Hell can be found here, while the famed radio jockey Thom Hartmann reads it with a straight face. https://www.youtube.com/watch?v=MdHr9KzrUjk
As Michael Nirenberg remarked on Huffington Post:
Neighbors From Hell delivers on its blunt title. Neighbors is a satirical volume in the style of a children’s bedtime story. It’s about the real monsters lurking in your neighborhood. The accompanying press release describes it, as belonging to the emerging genre of “children’s book for adults niche in the vein of Go to Fuck To Sleepwhich you may remember was hugely popular a few years ago.

Delivered in a cute rhyming style, you meet characters like Rhonda the Reality Star, and Paul the Mortgage Loan Officer for example. These monsters are somehow scarier than Dracula or Freddy Krueger. Neighbors could be the existential answer to Richard Scarry’s adorable Busytown books I read to my son, in which all the animals drive cars and have jobs. The characters in Neighbors are not nearly as cute or self satisfied. They remind me of the seedier characters that populate the underbelly of Springfield in The Simpsons.